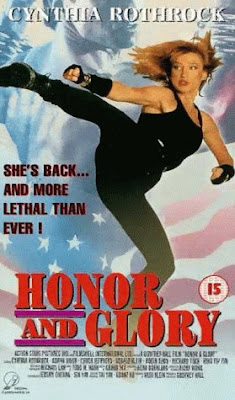 When a Bulgarian General steals a nuclear trigger and it goes on the black market, everyone’s after it, from the U.S. Government to the lowliest street criminal. But the guy who wants it the most is the unbelievably evil banking financier Jason Slade (Miller, in truly a star turn). Hot on his trail is the Pride family: FBI agent Tracey (Rothrock), her sister, a TV news reporter, Joyce (Jason), and their father, a CIA agent (Rocca). Also helping them out is Dragon Lee (Shou), Tracy’s old associate from Hong Kong. But Slade’s got more bad news coming his way: his former bodyguard Jake Armstrong (Jeffreys) has defected to the good guys, and they’re all coming for him and his evil empire!

This movie is pure genius. It really is. Godfrey Ho (here working as Godfrey Hall) manages another winner for his hit-or-miss repertoire. Featuring a lot of the cast and spirit as Undefeatable (1993), if you liked that, you’ll love this. It seems his shot-in-America stuff  (in this case Maryland) that isn’t cobbled together from a myriad of sources is his best material. From the first minute, when we see it is produced by Action Star pictures, and we see a boardroom of politicians who are the weirdest-looking gaggle of dudes maybe ever, you know you’re in for something great.

A lot of what makes Honor and Glory shine are the line readings from the actors. It’s kind of hard to explain, but the way the actors talk, and their deliveries, are simultaneously hilarious and mesmerizing. Add to all this the winning presence of Cynthia Rothrock, well-supported by Robin Shou, and Chuck Jeffreys, and you have a fun time had by all. As far as the relationship between the two Martial Arts-trained sisters is concerned, Tracey says to Joyce, “I chase honor, you chase glory”. But their last name is Pride, so it’s surprising this movie wasn’t called “Pride and Glory”. The thing about Chuck Jeffreys is, not only is he like Eddie Murphy, he’s BETTER than Eddie Murphy! Jeffreys deserves all the fame and fortune Murphy has. It’s just not fair. But top “honor” s go to John Miller as Jason Slade. The man is truly a national treasure if there ever was one. You thought you’d seen a movie villain before. You were wrong.

Aside from being the best movie baddie we’ve seen in quite some time, it would be awesome if Jason Blade fought Jason Slade. Alas, only in our dreams. But Honor and Glory is great as it is, so we have no complaints. Even the fast motion, and other things that happen plot-wise that we’re normally against, don’t seem to matter in this insane world. From the opening boardroom scene to the inevitable abandoned warehouse-set climax, Honor and Glory delivers the goods, with plenty of rewindable moments to boot.

We have the VHS released by Best Film & Video Corp/Imperial, and even though it’s in EP speed, the tape is surprisingly high-quality. And to quote the back of the box, “The action is non-stop and the challenge is ultimate”. Need we say more?

Also check out our buddy, Karl Brezdin from Fist Of B-List's review!

Sounds like a great Rothrock film! I need to get this one and Undefeatable as priorities. I finally reviewed a new film yesterday and it was a Rothrock one too; Angel of Fury. Turns out there are two Rothrock films with that name, and this one has Billy Drago and Sam Jones in it!

Both Angels of Fury are a lot of fun! Undefeatable is a must-buy.