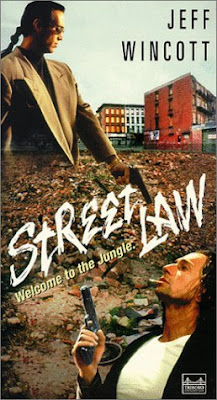 
John Ryan (Wincott) is a Toronto-based lawyer. He’s also very adept at kickboxing/Punchfighting. Unfortunately, Ryan’s life is about to come crashing down all around him. He owes $78,000 to a loan shark named Larry the Lender (O’Keeffe), and, whether through his own actions or because of outside forces, he just may lose his prestigious job, his swanky apartment, and everything else he holds dear. When his childhood friend Luis Calderone (Prieto) – now a criminal baddie - buys Ryan’s debt, besides creating strife between the two men, it opens up the only possibility left to Ryan: fight in underground Punchfighting matches to pay off his debt and restore his honor. When Luis’s girlfriend Kelly (Cox), who is basically his kept woman, gets involved, things get REALLY complicated. Will John Ryan win back his own life…and will he use STREET LAW to do it?

Not to be confused with the fantastic 1974 Franco Nero movie of the same name (AKA Il Cittadino Si Ribella), this particular Street Law is yet another disappointing Damian Lee movie that isn’t worthy of the talents of the great Jeff Wincott. Sure, Street Law opens with a lot of promise: Wincott cruising down the streets of Canada on his Harley, wearing cool shades, with both his long hair and the fringes of his buckskin jacket blowing in the breeze. It’s even narrated by Wincott. Soon, however, this promise is squelched.

For no real reason that we can discern even now, we then cut to a scene of Wincott prancing around the forest wearing nothing but a loincloth. Apparently it has something to do with a native-Canadian named Grey Feather (Fisher), who also is only loincloth-clad. Once the actual plot kicks in, there are a lot of dialogue-heavy scenes with unlikable characters the audience doesn’t care about. As much as we may love John Ryan’s lawyerings, we couldn’t help but long for better Wincott outings such as Mission of Justice (1992) or Last Man Standing (1996). Almost all of the fight scenes are officially-organized bouts in the ring (wherein the winner, after defeating his opponent, has to capture a flag tucked into the ceiling above the ring for no real reason) – this is contrary to what the title STREET LAW conjures in your mind.

There are a lot of unnecessary zooms and slo-mo sequences in said fight scenes. Just let Wincott and the other fighters do their thing. Don’t muddy the waters with a bunch of cinematic techniques that just get in the way. And not for every scene, but for too many of them, there is a shotgun noise and a quick flash of light as a transition. Not only is this annoying and unnecessary, but Damian Lee did a similar thing in Fatal Combat a few years later (1997), where instead of a gunshot it was loud television static. And as much as we love Wincott, the movie needed another name, such as a Robert Davi or an Eric Roberts to spice things up. The final nail in the coffin is Wincott’s famed trademark of stickfighting is there in a literal blink-and-you’ll-miss-it two second blip. It looked like there might have been more stickfighting filmed but it was cut. So, put all this together and it’s kind of hard to care about the proceedings.

However, it’s not ALL doom and gloom. Wincott’s buckskin jacket puts Seagal’s to shame, and he does have a cool long-hair-and-vest combo that is very 90’s and very winning. He also gets to show his acting range somewhat as a lawyer, although he did play a professor in the aforementioned Fatal Combat, a film which does have a lot of similarities to Street Law. Wincott does seem to throw himself into his role, and his Martial Arts are well-executed, but only a handful of moves are really used to their full potential. By far the high-water mark of the entire movie involves a bow and arrow, but we won’t give it away, because if you decide to see this muck, we certainly don’t want to spoil the unqualified best part for you.

Featuring the song “Undertow”, the title track of their 1994 self-released album by Canadian band Big Faith (Tool released theirs in 1993), among other songs by Big Faith, we would say that Street Law is for die-hard Wincott fans only.

I wish I could be the Ghost of Christmas Future, and go and tell the Jeff Wincott of 1994 ”Stay with PM!” His career turned into mediocrity, then obscurity, after leaving PM. In Europe and Canada, this movie was called Jungle Law. So the name was changed for the US market.

You're absolutely right about Wincott's output! It realty decreased after Last Man Standing\Martial Outlaw. Didn't know about the alternate title, thanks for the info.

"For Die Hard Wincott fans only" AKA every reader of comeuppance reviews! Haha