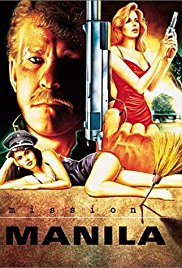 
“Web” Webster (Wilcox) is a mustachioed American gentleman who travels to – you guessed it – Manila to try to find his missing brother. Evidently, a mob boss named Harry Costelo (Mancini) doesn’t appreciate all of Web’s poking around his turf, so he makes Web’s life harder while he’s there. Harry is a heroin runner and Web’s brother Tony (Hennings) is somehow involved. Web has help in his quest in the form of Susie (Eisenman), but what’s his true relationship to the other woman in his life, Maria (Agbayani)? Will Web be able to weave his way out of the sticky situation he’s found himself in? What will be the final result of MISSION MANILA?


Unfortunately, Mission Manila, despite all of the promise inherent in the presence of Larry Wilcox, is weak. Its dearth of action reminded us of other nigh-on actionless movies such as Best Revenge (1984) and Sweet Revenge (1987). Just try to imagine Cocaine Wars (1985) without the majesty of John Schneider, and that’s pretty much what we’ve got here. Director Mackenzie even worked with Schneider much later in his career with a film called Doonby (2013), so he must have a type. Mackenzie also directed the Asher Brauner vehicle Merchants of War (1989), and astute viewers will note some similarities between that and Mission Manila, if they care to put in the effort to do so. Interestingly, the aforementioned two movies - plus ‘Manila - are the only ones Mackenzie has directed in his career. 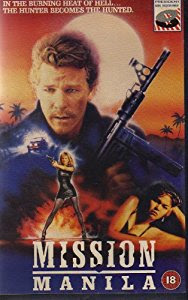 ‘Manila had all the ingredients for a winner: it was shot in the Philippines, it featured regulars of the action movies shot there such as Willie Williams, Henry Strzalkowski, and a rare appearance from the great Jack S. Daniels, a simple plot that could have allowed for a lot of action, and Larry Wilcox unmoored from the ball and chain that was Erik Estrada.

What we do get is a silly alley fight that lasts a few seconds, a brief shootout, the world’s stupidest (and most laugh-inducing) neck snap, and maybe a blow-up at the end. What about the other 90 minutes? Larry Wilcox’s big weapon (as featured in the trailer, leading us to believe he will be using it a lot, which he doesn’t) is a slingshot. Like some overgrown Dennis the Menace, Larry Wilcox has blonde hair and a slingshot. All of this could have been so easy to fix, it’s criminal. Wilcox and Eisenman should have rampaged all through Manila, shooting, beating up, and rocket launcher-ing many baddies. Would that have been so hard? Instead, Mancini insists on calling everyone a “ratbag” and Eisenman gets tied to train tracks like in the days of yore. Yawn. 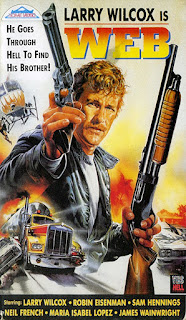 While it does have some interesting cinematography at times, that wouldn’t have caused anyone to pick Mission Manila off the shelf of their local video store back in the good old days. With all the choices we as patrons had at our fingertips, it’s hard to imagine anyone purposefully choosing Mission Manila. What ‘Manila really seems to be is a bellwether – a sign that the golden age of the 80’s was gone and the 90’s were here. In the very near future, action movies – in the Philippines and elsewhere – would become watered down.

Also Larry Wilcox goes to a bar called The Hobbit House with an all-midget staff. This must have been a real place, because a diminutive bartender named Goliath is credited as himself. So maybe this movie has some bright points after all.

I completely agree. There’s nothing to recommend this one nor separate it from countless other similar movies.

You're absolutely right. Just shelf filler. It was a good idea though to have Wilcox though.