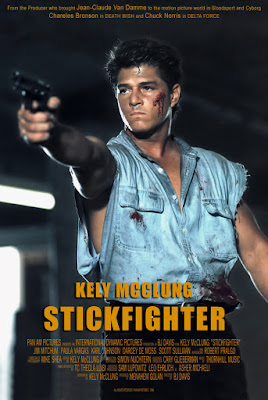 “I have the authority of justice.” - John Lambert


John Lambert (McClung) is a Himbo cop with an attitude. After his beloved partner is killed during a drug raid, Lambert turns in his badge and gun and walks away from the force. He turns to his now-deceased partner’s sister, Luella (Meneses) and old buddy Mule (Mitchum), to help him fight the baddies in his own way. It turns out that a drug lord named Dirk Riley (Johnson) has put a contract out on Lambert and Luella, so they’re constantly on the run together even as Lambert uses his awesome Martial Arts moves on many, many goons. During all this, the LAPD is trailing Lambert’s comings and goings. Naturally, it all ends in the time-honored Final Warehouse Fight. Also everybody calls Lambert “Stickman” because he’s good at fighting with sticks, apparently.


Kely McClung – not to be confused with Edie McClurg – is our new personal hero. This is because Stickfighter is a certified classic of that silly/stupid/dumb/awesome/funny/classic-90’s type of movie that is hilarious, totally entertaining, and cliché-ridden in the best possible way. It has that great semi-pro feel complete with awkward staging, dialogue, and editing. Most of the actors appear to be non-actors, including our hero. He tries hard to be the classic wisecracking 90’s cop we all love and enjoy but he doesn’t have the timing to pull it off. Hilarity ensues. 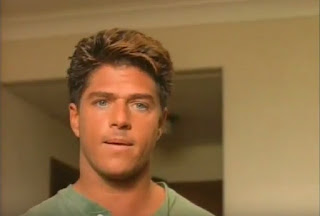 In the grand tradition of L.A. Wars (1994), Geteven (1993), Parole Violators (1994), The Crime Killer (1985), and even Night of the Kickfighters (1988), Stickfighter can proudly claim its rightful place in the pantheon of wonderfully weird one-offs that are brain-damaged brothers of their more well-known action contemporaries. In other words, the Alamo Drafthouse needs to find a print of this post-haste. The audiences will eat it up.

There is, more or less, non-stop action, and the pretexts for said action scenes are almost as great as the action scenes themselves. Guitar wails on the soundtrack accompany most of what we see. Many of McClung’s ingenious fighting moves have to be seen to be believed. Somewhere in the midst of all this absurdity appears Jim Mitchum, who boasts a series of fascinating shirts. He plays a Vietnam vet/strip club bartender who is buddies with Lambert. He was probably happy to be there. 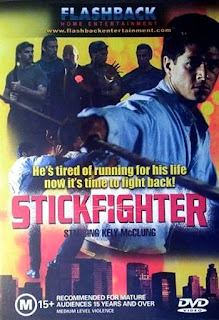 Interestingly, the first company logo we see before the movie begins is not PM or AIP, or something else, but none other than Pan Am Airlines. Of all the potential projects that Pan Am could have put its corporate muscle behind, why did they choose Stickfighter? And couldn’t they have given it a bigger budget? But the ultimate question remains: Did Stickfighter ever play as the in-flight movie on any Pan Am flights? Of course, Pan Am doesn’t exist anymore. Sure, you could blame Stickfighter, but I’d rather have Stickfighter.


Featuring quick cameos from Nils Allen Stewart and Arsenio “Sonny” Trinidad, we believe Stickfighter is nothing less than an underground classic. If you want to laugh and have a great time while suspended in a state of stupendousness, for the love of all that is good we’re begging you to watch STICKFIGHTER!

This was a great recommendation. Another classic to add to the list. Notable scenes include -

- Dude doing a flip in the pool after being shot by a shotgun. (The reveal of the shotgun was fucking classic as well.)

- The wonderful nudity of Alex Meneses

- And of course, Mr. McClungs use of a bad guys body as a sled sliding down the stairs.

Thank you for mentioning his "special ed" expression, that was the funniest part. We appreciate it. Of course that stands out. Your other points are well-taken.

The staircase is a cinematic highlight not just in this movie but for all movies.

Spread the word about this underground classic!

I watched this on You Tube based on the excellent review and wasn’t let down. The sheer ludicrousness of this film is almost unparalleled. At every turn someone was trying to whip Stickfighters ass, people were being shot and killed all over the place, run over, nude scenes by the dozen ... I watched this in disbelief. Where did it all go wrong? And this was the 90s too. It’s hard to pick a best scene, but the drug bust was classic, followed by the hilarious spectacle of some old age pensioner being shot to death, shortly after being the victim of an attempted snatch and grab.

100 percent agree. This was absolutely ridiculous fun! Almost every scene is the best scene, it's hard to pick just one.

I first saw this on B-Movie TV on Roku - which you must download now, if you haven't - and thought it was incredible. It truly embodies practically everything I look for in these dumb/awesome DTV martial arts/action flicks - cool fights, bad acting, lots of nudity, cliches ahoy, etc. There isn't a single moment in this film that I wasn't entertained/laughing my ass off.

And it should be noted that this was produced by Menahem Golan, because of COURSE it was.

Anyhow, I love the blog - I've added/watched many films based on your recommendations. Keep it up!

Thanks for the kind words!

Totally agree with you, this movie is so much fun to watch and we love spreading the word about this awesome movie. Most movies you're not entertained the whole time, but Stickfighter delivers the goods.

This is a must see, no doubt about it! Staircase scene is incredible and when he gives that dude a hacky sack jester kick to the face a couple of times it's solid gold.