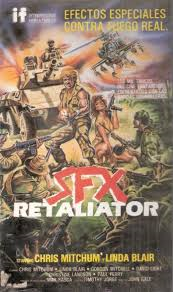 
Steve Baker (Mitchum) has anyone’s dream job: he’s a special effects technician on movie sets, specializing in pyro. In other words, he travels to jungles far and wide in his tricked-out van and sets up the controls that provide the explosions. When the director calls “action!”, that’s exactly what Baker provides. His life gets more complicated, however, when he has a chance meeting with a woman named Doris (Blair). It seems Doris is on the run from mobsters, the lead baddie being Morgan (Mitchell). So, Baker fights off the baddies the only way he knows how – using his bag of “SFX” tricks. You’d think the bad guys would learn not to mess with Steve Baker, but at least they get one valuable takeaway: don’t upset his cobra.

The ever-reliable and ever-laconic Chris Mitchum teams up with The Firing Line (1988) director Gallardo to turn in this entertaining winner of a movie. There are some extremely cool sequences, and, speaking of cool, it’s hard to get much cooler than Chris Mitchum, especially in this movie. His nonchalant attitude is a joy to watch. He’s surrounded by a swirl of silly accents, sillier dialogue, and plenty of mindless shooting. That’s what highlights the “SFX” scenes that much more; other exploding-hut-type movies don’t have that type of innovation, so ‘Retaliator stands out from the crowd. Much like how Steve Baker’s awesome van would stand out in traffic. 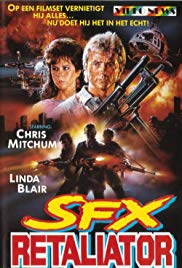 Besides sporting a canny concept, SFX Retaliator boasts some other benefits as well. Firstly the cast, with the always-welcome Mitchum supported by fan favorites Linda Blair and Gordon Mitchell. Unfortunately, Blair doesn’t get to do a heck of a lot, but Mitchell resembles an angrier Hugh Hefner as he barks orders to his underlings. Which is pretty much all he does here. On top of our three leads, another great aspect is the soundtrack. Not just the incidental music, which is quite enjoyable, but the main theme song heard during the opening credits as well. Featuring the lyrics “Retaliate, retaliate, retaliate…RETALIATE!!!” it’s hard to go wrong.

The whole outing is like something Arizal would direct, and features a low-budget exploding helicopter. Criminally, SFX Retaliator has never been released on any format in the U.S. (or even in the U.K. as far as we know). This could have been, at the very least, a cult classic if someone like Vestron or Lightning Video had put it onto video store shelves in 1987. Sadly, that was not to be, and as of this writing, SFX Retaliator sits patiently waiting for rediscovery. A company like Roninflix or Vinegar Syndrome should release it on Blu-Ray. Until that happens, there’s always YouTube.

SFX Retaliator is a lot of fun and well worth your time.

Before reading your review I went on YouTube and found it. This movie sounds awesome and i will check it out. Especially seeing how the main baddie is Gordon Mitchell. Good review man.

I agree. Jun Gallardo (or John Gale in Filipinglish) is one of the collectable Filipino directors that should be mentioned in the same breath as Cirio Santiago, Teddy Page and Anthony Maharaj. In an era when the video store was full of rip-offs of Rambo, Mad Max, Terminator and Platoon, this movie had the novel idea of ripping off F/X. Bonus points for creative thinking! Filipino movies from the 1980s are always enjoyable, and highly recommended as an antidote to contemporary soulless CGI SFX spectacles. What would Steve Baker think of today’s movies? The Gallardo-Mitchell movie Commando Invasion and the Gallardo-Rom-combo Slash are even better...!

BTW, someone just posted the extremely rare Teddy Page movie Trigon Fire on Youtube, so check it out!

Joseph: Thanks buddy! Looking forward to your opinion on the movie.

Roger: That is a good idea to rip it off. But this is called SFX! Haha Thanks for the heads-up about Trigon Fire we will watch it very soon.