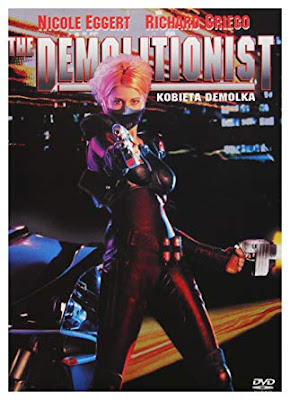 In the future, Metro City is overrun by crime. While Mayor Grimsbaum (Tyrrell) attempts to make herself look good in the midst of this epidemic, most of said crime seems to be masterminded by the Burne Brothers, Mad Dog (Grieco) and Little Henry (Vasquez).

On the eve of their electric chair execution, Mad Dog escapes and reconnects with his old gang in the city. Undercover cop Alyssa Lloyd (Eggert) infiltrates Mad Dog’s gang, but is recognized and then assaulted and left for dead. However, thanks to Professor Jack Crowley (Abbott), Alyssa is regenerated and then put into a nifty skintight black Kevlar suit. After singlehandedly lowering the Metro City crime rate, Alyssa Lloyd is rechristened “The Demolitionist”. Though, to be fair, if you’re looking for buildings to be demolished, Alyssa isn’t really your gal. Anyway, the final battle between The Demolitionist and Mad Dog inevitably materializes…who will demolish who? Or…whom?

Starting with the obvious, The Demolitionist is a low-budget cross between Robocop (1987) and Darkman (1990). Or, more in our wheelhouse, it’s better than Robo-C.H.I.C. (1990) but not as good as Cyclone (1987). We believe the Darkman comparison is especially apt, because director Kurtzman – an associate of Sam Raimi thanks to his being the “K” in the KNB EFX group and having worked with him in the past – really seems to be Raimi’ing himself in here. Perhaps the closest comparison, really, is to Raimi’s short-lived M.A.N.T.I.S. TV series. The Demolitionist has a very similar plot to that, but instead of Carl Lumbly in the super-suit, it’s Nicole Eggert.

Further comparisons could be made to Barb Wire (1996) and Point of No Return (1993), but that’s just it: there’s almost endless movies we could compare The Demolitionist to. Lack of originality in a comic-book movie like this isn’t, alone, such a bad thing, but The Demolitionist is missing the wit and sense of pacing that a Raimi movie has. We have to wait a long time for her to really become “The Demolitionist”. 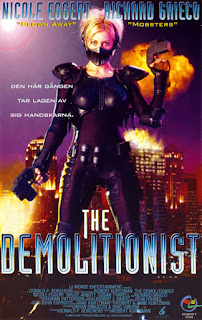 On a more positive note, the idea of Nicole Eggert as a supersoldier who wants unending revenge on her enemies is a strong one. She walks away slowly from an explosion, which is good, and her Revenge Outfit is pretty cool, but are her guns so high-powered they cause a pinkish chalkdust to arise from her targets? What’s that all about?

One of the best things about this movie is the cast. It’s chock-full of B-movie names we all know and love, and there’s even a cameo by, you guessed it, Bruce Campbell. As if the Raimi comparisons needed further enhancing. It would take too long to list everyone involved, but one Rosey Brown as Big Frank steals the movie despite his brief appearance. 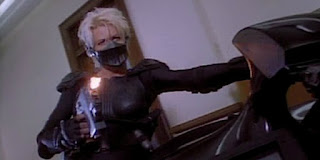 As much as we enjoyed watching Nicole Eggert take on this type of role, we can’t help but wonder what would have happened if PM made a movie like this and cast Cynthia Rothrock as the heroic avenger in the shiny black suit. We can only imagine the result would be stronger than this, because The Demolitionist has a junky look to it that does it no favors. It really shows what a low budget DTV product this truly was, but that should have been easily sidestepped by the cast and behind-the-scenes makeup dudes who masterminded this whole misadventure.

Featuring the end-credits song “Demolition” by Paul Blubaugh, sadly The Demolitionist will never boast an endless series of sequels, a TV show, a toy line, a comic book, and mass-market pop culture appeal. We assume that’s what the filmmakers were going for, but it’s missing a certain “it factor” that would cause it to be the latest superhero sensation. But, then again, not everything can be a Green Lantern (2011).