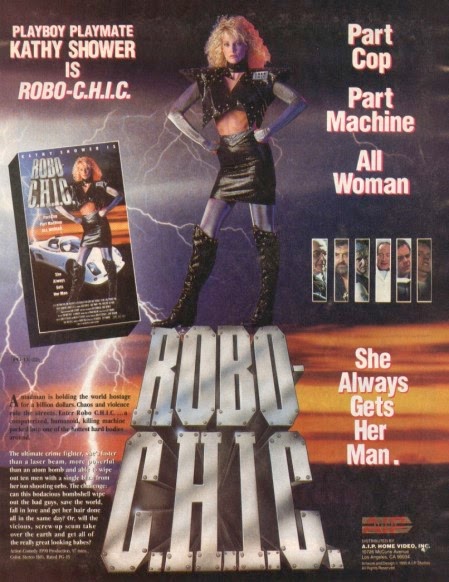 When self-consciously "wacky" scientist Dr. Von Colon (King) creates a beautiful cyborg called ROBO-C.H.I.C. (Shower and Daly), he believes he has created the invention of the century. When she beats up some punks in an alley, the doctor realizes she can be used to fight crime. Meanwhile, a nebbish named Harry Truman Hodgkins (Ward) has claimed in the media that he has positioned a series of bombs and is going to set them off one by one. So ROBO-C.H.I.C. has to try and stop him, and meanwhile a criminal organization led by a guy named Quentin (???), as well as some bikers, are trying to stop ROBO-C.H.I.C. from depopulating their respective criminal organizations. Will you make it through to the end to see what happens?

It's hard to tell who the intended audience for ROBO-C.H.I.C. is supposed to be. Just to be absolutely clear, this is not an action movie. AIP never should have released it. It's an insufferably unfunny so-called comedy, and why the filmmakers thought the predictable, hacky jokes would hit home with any audience remains frustratingly unclear.

Imagine if the production staff of 80's sitcom Small Wonder attempted to make Robocop (1987). And it's even less funny than that would probably be. Of course, from today's perspective, the idea of a bomber who wants to slaughter thousands of people using homemade explosive devices doesn't scream out as being a rich vein for hearty comedic laughs. And the character was played by TV's Robin, Burt Ward, so he now has this embarrassment on his resume. Too bad he didn't follow the example of his pal Adam West, and appear in high quality productions in the 80's like Night of the Kickfighters (1988) and Omega Cop (1990) (cough!). 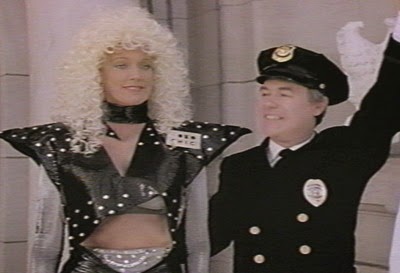 ROBO-C.H.I.C. is completely in keeping with our theory that bad movies are long movies. This whole annoying exercise in patience lasts an agonizing 102 minutes, and is irritating right up until the final second, just like an awful old vaudeville comedian that has to get the hook because he doesn't know when to get off the stage.

Just like the old hokey comedian who is blatantly desperate for cheap laughs, ROBO-C.H.I.C. comes from that very same DNA of those old performers. 102 minutes. Inexcusable. 80 would have been pushing it for what would have been an intolerable 8-minute Saturday Night Live sketch. Or is that redundant? Regardless, the super-slow pacing, if it even deserves to be called pacing (calling it that would imply there is a pace, or at least one that anyone thought about), is the heart of the problem. It all moves at a torturous crawl. WHY is it so slow and long? Seriously! We demand answers!

Another of our theories that this dreck is consistent with is the "two directors (or more)" theory. Not good. Even Kathy Shower, who is credited as a producer on the project, bailed, to be replaced in various scenes with one Jennifer Daly.  One of the directors is Jeff Mandel, the writer/director of all-time AIP classic, Elves (1989), released the same year as ROBO-C.H.I.C. Talk about a schizophrenic career. He also wrote AIP entry Firehead (1991). In other behind the scenes news, the guy who played Dr. Von Colon is Chris Kattan's father. It must be genetic.

This movie is so painfully bad, it will make you long for the subtle, biting, incisive comedy of Mango. And no amount of nudity can paste over the flaws of this turkey. But characters do smoke indoors and wear fanny packs, and you get to see the old Dunkin Donuts logo, so there's a bit of nostalgia there. But it's not nearly enough to recommend this crud. If you want to see a much better movie with a similar idea, check out Steel and Lace (1991).

On top of the humorlessness and snail's pace, the movie doesn't even seem to care whether it's good or not. The audience feels jerked around by a bunch of people who can't even put in any effort to care to make a halfway decent production. ROBO-C.H.I.C. is just so, so lame. Never see it.

Comeuppance Review by: Brett and Ty
Posted by Ty at 9.4.14

I agree that this movie was too long, though I did find it funny and I do like Kathy Shower, so that at least made it tolerable for me, i'll gladly watch this film over horrendously unfunny garbage like "Year One" or "Your Highness" any day of the week.

If you want a better Kathy Shower movie, watch Out On Bail...she's actually in the whole movie...unlike Robo-Chic. Haha.