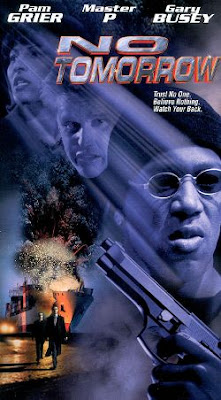 "Ya Gonna Wind Up Daaaiiiid"- C-Murder


Jason (Daniels) is a likable (of course) London transplant trying to make ends meet in L.A. as he chases the American Dream. Jason is a card-carrying member of his local video store and loves nothing more than to play Terminator 2 and Jurassic Park pinball at his local dive bar. His gregarious co-worker Davis (Fahey) charms him into getting involved with crime boss Noah (Busey), but Jason really doesn’t want to be a criminal. However, Noah takes a shine to Jason. It turns out that fellow criminal Maker (P) is after Noah, as is an FBI Agent named Diane (Grier). In the midst of all this chaos, Jason and Lara (Wise) forge a relationship. Will the hapless Jason walk away with his life, or for him will there be…NO TOMORROW?

As one of the final films produced by PM, No Tomorrow signaled the death knell for one of our favorite companies. The title proved to be more apt than perhaps even they realized.

If there was ever any last-ditch attempt to save the company from impending doom, handing the directorial reins over to Master P for this movie would seem to indicate that their hearts just weren’t in it anymore. You’d think a DTV outing with all these classic B-movie stars couldn’t lose, but it’s just another case of Lone Tiger Effect. The fact that footage was recycled from Narrow Margin (1990) and Air America (1990) just reinforces the “Now it’s 1999 and DTV is in the doldrums” vibe. 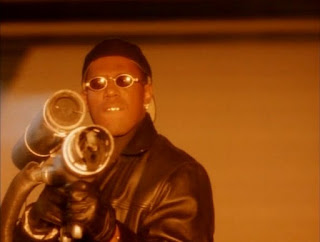 Yet, because it’s still PM after all, the stuntwork, action, gunfights, pyro, and blow-ups are still excellent. The technicians behind making all this amazing stuff happen should be applauded for making it all look great on-screen. The problem is that the movie around it is a dud. It’s completely uneven; one minute Master P has some sort of combination flamethrower/missile launcher and is barbecuing everything in sight, then there are some extended dialogue scenes, then we’re in Master P’s recording studio watching Silkk Tha Shocker AND C-Murder lay down some tracks (all while wearing No Limit clothing, of course), then Pam Grier sits in an FBI control room for a while, and then we get some recycled footage, etc., etc. There no continuity, structure, or pacing, never mind a Tomorrow.


We’re of two minds about Gary Daniels’s role in all this. On the one hand, yes, of course we want to see him do Martial Arts, which is missing from this performance. It’s hard to not see that as a missed opportunity. On the other hand, we kind of liked that he was cast against type as a humble pencil-pusher. In other casting observations, we liked Fahey’s freewheeling, smarmy performance – he probably figured he didn’t have a lot to lose here, so he hammed it up. It was pretty Charlie Sheen-esque.

Things perked up whenever Gary Busey was on screen. As usual, he brought a lot of crazy life to the scenes he was in. He even makes it a point to say that Maker produces, and we quote, “jungle music”. Fan favorite Frank Zagarino has a glorified cameo (Jerry Vale of all people has an actual cameo), and Master (thespian) P gives a mumbling, inarticulate performance, but in all fairness he did have to talk around his gold grill. It probably gave him problems, but is this guy supposed to be the hero of the movie? It’s impossible to tell. Needless to say, there’s a crazy twist at the end that turns all the nonsense we’ve heretofore seen on its head, as if that was necessary.

Yes, it’s all very junky and a fairly ignominious end to the once-fine PM organization. Even Hot Boyz (2000) is better than this. Sadly, even the classic exploding helicopter had to come from the aforementioned Narrow Margin footage. Jeff Fahey and Gary Daniels should’ve been cops who team up to bust some heads. It could have been like the classic years of PM and really cool. Instead, they came up with this muddled jumble of Homie Movie/drama/thriller/DTV actioner and it doesn’t really work.


Despite the presences of some of our favorite names, and the backing of a great company, No Tomorrow is a disappointment.

Terrible movie, proof if ever needed that jungle music entrepreneurs should not be actors or directors.

Haha agreed! This was waste of a once in a lifetime cast. Plus Gary beats up NO ONE. He's just a nerd. Very bad decision.