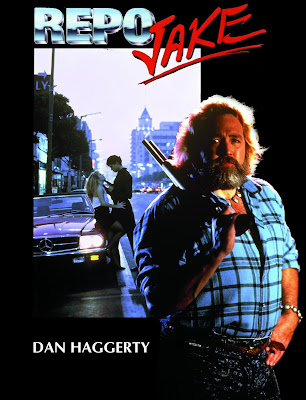 Jake Baxter (Haggerty) is a mild-mannered and likable repo man who moves from Minnesota to Los Angeles for a business opportunity in the world of repo’ing. As an ex-Marine and former race car driver, there’s very little that scares Jake Baxter. On his first day in L.A., he thwarts a purse snatcher and develops a romantic relationship with the intended target, Jenny (Bentley). He then moves into the same apartment building as her and begins his new life.


Now working with a classic ragtag bunch of misfits, including aspiring rapper Darnell “Jam” Jones (Hansborough), the hapless Lippy (Cox), Wiseguy Skidmark (Garcia), the sleepy Waldo (Walker), and fellow racer Blondie (Wilcox), among others, Jake fits in well with his new bros. But what he doesn’t realize is that danger is afoot in the form of nefarious gangster Kovar (Reilly) and his vicious underlings, including Lincoln King (Axelrod).

Amongst their many criminal activities is illegal gambling on something called the “Slam Track”, which is itself an illegal car race. Will Repo Jake return to his racin’ ways? Will he and Jenny survive the threat of mobsters? Will any cars blow up? Only REPO JAKE knows the truth… 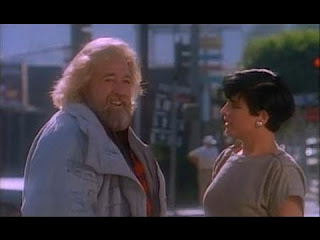 It’s “humor and Haggerty” as PM tries a more lighthearted tone this time around. The main influence here seems to be D.C. Cab (1983), though Dan Haggerty does throw that purse snatcher through several windows and there are some other light-violent bits. It is PM after all. As much as we all love Lee Canalito, the choice of Dan Haggerty as main star is an inspired and welcome one. His screen presence and genial good-humoredness carries the movie. It would have suffered a lot without him.

Clearly car repossession was very hot back in the video store days, as Don “The Dragon” Wilson was one in Bloodfist IV: Die Trying (1992) and Corey Michael Eubanks was as well in Forced To Kill (1994). And lest we forget Repo Man (1984). As usual, PM was ahead of the curve and made what is arguably the ultimate direct-to-video repo movie.

As a side note, let’s not forget that in 2011 the show Repo Games premiered, where deadbeats who didn’t pay their car payments agreed to answer trivia questions in a desperate bid to keep their vehicle. Repo Jake puts all this modern-day cynicism in perspective. We would all like an ally such as Jake Baxter on our side.


While the mixture of wacky humor and evil gangsters forcing drug-addicted women into prostitution is certainly an uneasy one, Repo Jake is a good example of the type of movie that isn’t being made anymore, and which gave color and interest to your video store choices. It also shows PM was adventurous and willing to try new things.

In the end, Repo Jake is an enjoyable way to spend 90 minutes or so, especially for PM buffs.