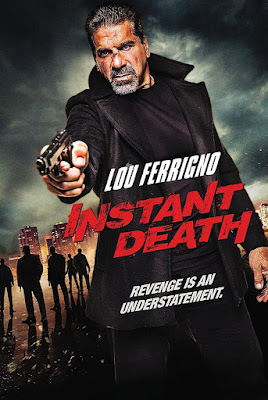 Finally in civilian life after a lifetime in the military, vet John Bradley (Ferrigno) is having a hard time adjusting after leaving the Special Forces. He feels reconnecting with his daughter and his granddaughter would do him a world of good towards that end, so he flies from New York to the UK to be with them.

Unfortunately, Bradley was in the wrong place at the wrong time, as he inadvertently witnesses some of the bad dealings of uber-baddie Razor (Anderson) and his drug gang. In order to get to him, Razor sadistically goes after certain members of the Bradley family in some truly horrible ways (we won’t give anything away).


Now on a no-holds-barred mission of revenge, John Bradley reverts to his old ways – fighting is the only thing he knows. Thankfully, he knows it well and he’s using his “particular set of skills” to take out the trash of London’s underworld. With the police and military after him as well as the gangster baddies, will John Bradley be able to deliver INSTANT DEATH?

Thank goodness for Taken (2008). Not only is it a fantastic movie in its own right, it single-handedly made it acceptable for aging stars to return to – or join for the first time - the action fray. The term “GeriAction” seems to have been coined shortly after the release of The Expendables (2010), and everyone from Liam Neeson to Clint Eastwood to Sean Penn have been showing young whippersnappers that with age comes experience…fighting experience! 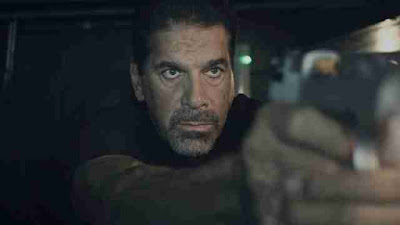 With that in mind, it was only a matter of time before Lou Ferrigno became involved. Instant Death has a lot going for it: a simple and effective revenge plot that unfolds quickly over its 80-minute running time, Lou puts on a revenge outfit and proceeds to decimate the entire baddie population, and Razor is a really bad baddie. All the ingredients are there. But why – why – must they use so much CGI?


If they were going for a gritty 80’s vibe, why not use squibs, practical effects, and real fire? That would have been so much cooler! Correct us if we’re wrong, but did we see a CGI train? The movie already has a low-budget, down n’ dirty look (which is completely fine by us and not at all a criticism), but the CGI effects were a wet blanket for us. Not so much that we didn’t enjoy the movie on the whole, but we couldn’t help but think it would have been more satisfying for the viewers without it.

Much like how Robert Rusler saved Air Strike (2002), Lou Ferrigno does the same thing here. (That must be why you read this site; you’re not going to see a sentence like that anywhere else). Sure, the fight choreography came off as a little stiff at times, but undoubtedly this is a career-best performance from Lou. He must have been thrilled to get the call to be in this movie, and he really gives it his all. It was a joy to watch his lumbering, Schwarzenegger-esque fighting and line deliveries.

Let’s face it, the idea of Lou Ferrigno in a revenge movie against London gangsters is pure gold. We’re super happy this was made.


Despite our anti-CGI stance, we applaud director Paiaya and the rest of the cast and crew for carrying this movie off. You could tell they were striving for something good and Instant Death overall is a satisfying watch.

There’s no doubt this film is good for a laugh. I couldn’t stop shaking my head at the ludicrousness of the whole thing. Supposedly Ferrigno is ex Special Forces, yet his daughter lives in England for some reason. He’s also good buddies with some aging English special operations guy, who despite being in the military, has a full beard, wears his beret everywhere and appears to be 75 years old. Was Ferrigno on some special assignment to the UK for his whole career? How old was Lou when he retired? 65? It’s as classic as Arnold being a retired Colonel in Commando, despite being 38 at the time, which surely would have made him the youngest person to ever achieve that status.

We totally agree! Those are some funny observations, it makes movies like this fun to watch.