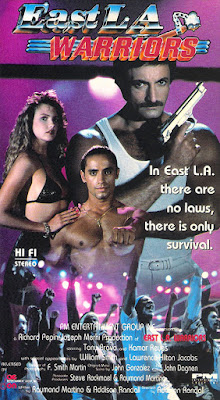 The streets of east L.A. are plagued with gangs such as the Anglos, the Boppers, and Los Lobos (not to be confused with the band of the same name). It seems every night there is a report on either the TV news or the radio about the latest gangland slaying. One night at a birthday party in the park, there is yet another drive-by shooting. Amongst the victims of this particular drive-by is the pinata. Of course there was a pinata. And it was blown to kingdom come by one of the most evil and ruthless gangs around. But which one was it? Young Paulo (De Los Reyes) wants answers.


So, naturally, Paulo goes to local tough man Aurelio (Bravo). He asks Aurelio to turn him into a “warrior” and, of course, Aurelio refuses the first couple of times. However, before long, they’re training on the beach together – but Aurelio harbors a secret that just may shatter their friendship forever. Meanwhile, something called the “gang games” are being held at a secret warehouse location.

Said games are basically Punchfighting matches that are held in a ring and fought between rival gangs. The big-cheese organizer of the gang games is Chesare (Hilton-Jacobs). While the cops just want to stop the violence, Chesare just wants to continue it on his own terms. And what does William Smith have to do with all this? Will the streets of east L.A. ever be safe again for either man or pinata? 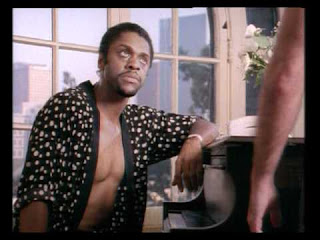 It was 1989 and PM was on the upswing. While their best years were still ahead of them, East L.A. Warriors is an example of how they were diligently cranking out entertaining low-budget fare as they grasped to find their true purpose and calling. That would come later with gems such as Rage (1995), Riot (1997), Recoil (1998), and The Sweeper (1996), amongst others. But in the meantime, we get “The Karate Vato” as a certain type of kid is mentored by a guy who looks a lot like Tom Savini.

Many people wear doo-rags, hair nets, only button the first button on their shirts, and consistently call each other “ese”. If you watch this movie with the closed captioning on Amazon Prime, there are many times where the subtitles read “[inaudible]”. And nowhere is this more true than when William Smith speaks. It’s hard to understand him in English – and here he attempts Spanish! Also, by turns, other characters call him “Mr. Montana” or “Mr. Martelli”. Whatever his name may be, Smith only does an inconsequential role as a restaurant manager. We were happy to see him as always, but why not give him a better role? 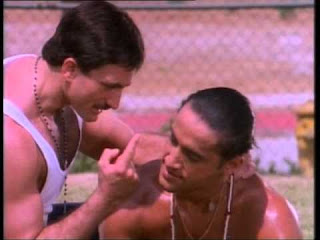 Speaking of classic PM actors attempting to speak differently, we have Lawrence Hilton-Jacobs showing his range as Chesare, a guy with an accent (presumably Hispanic or Spanish-adjacent). What was good about Chesare’s gang games is that the filmmakers saved them for the very end of the film. That was smart because it avoids the boring repetition experienced in many tournament movies. In other fight news, there is a flashback where Aurelio and another man fight each other with hammers. This predates The Raid 2 (2014) by many years. As we always say, PM movies are always ahead of the curve.

It’s amazing to think director and co-writer Addison Randall made both this movie and the great Shotgun in the same year. It was 1989, after all, a boom time for DTV product. It’s perhaps even more amazing to know that Randall – for the first and only time in his career – also wrote and sang the end-credits song “Living to Die”! That’s right, Addison sings! Is there anything he can’t do? The PM movie Living To Die (1990) with Wings Hauser came the next year, and does not feature the song. We may never know why.

While the action-packed, car-flippin’ days of classic PM were just a few scant years away, East L.A. Warriors represents a time after City Lights but before golden titles like Last Man Standing (1996). Is it a social-realist film about the harsh world of gang life? Is it a Punchfighter? Is it a Karate Kid knockoff? Can it be all three? Normally a jumble such as this could be a total mess, but in the world of 1989 PM it works well enough. And it’s better by far than Street Hitz (1992).