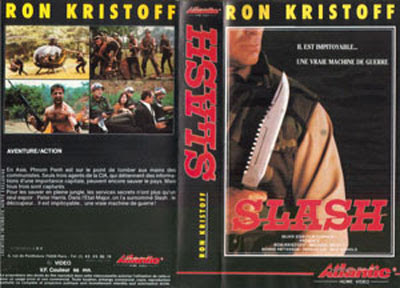 
Starting during the Vietnam War, Peter “Slash” Harris (Rom) and Major Andrew Scott (Mike Monty, not to be confused with Dolph in Universal Soldier) are buddies during the thick of the fighting. Later on in life, Scott becomes a CIA agent. He works with a woman named Barbara (Hung), and they go between Cambodia and Thailand fighting the commies. After Barbara steals some secret KGB files from a hidden safe, she’s kidnapped by baddies. Scott’s reaction is only natural: he calls Slash to go and rescue her and/or the files. As a one-man fighting force, Slash proceeds to mow down countless faceless nameless bad guys along the way. Will Slash be saying “welcome to the jungle”? Find out today…

Like the other Jun Gallardo films we’ve seen, Slash has a lot of what you might call “third-world charm”. We’ve mentioned this in other reviews, especially for the films by Arizal (who’s a heck of a lot more talented than Gallardo in our opinion), but the main gist is this: making an action movie under near-impoverished conditions didn’t stop them from giving it their all. Gallardo probably figured that he couldn’t deliver deep dialogue exchanges and well-thought-out plot developments to audiences, so he’d make up for it with non-stop machine gun-shooting and explosions. 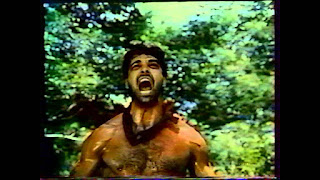 From the second the movie appears on the screen, there are shooting and blow-ups, and it basically doesn’t relent from there on in. Of course, this is yet another jungle-set exploding hut movie, where lush, verdant settings are torched into oblivion and an inexhaustible supply of uniformed assailants are continually mowed down.

There’s so much smoke on screen at the outset, the white titles are not legible to the audience. Did the filmmakers not notice this during the editing process? Anyway, all our Philippines-set regulars are here: Mike Monty, Nick Nicholson, and the rest of the gang. As our stand in for Rambo, we have Rombo – Rom Kristoff. It’s enjoyable to watch him scream, shoot machine guns, and scream while he shoots machine guns. 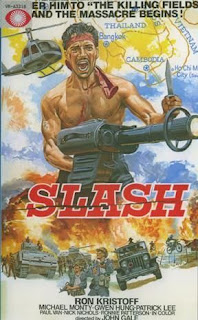 His rocket launchers inexplicably make a laser noise when fired, and there is a memorable exploding helicopter along the way. Naturally, guard towers blow up and huts blow up. The villain of the piece doesn’t show up until way late into the proceedings. He should have been around earlier so as to set up the good guy-bad guy dynamic and tension.

While not in any sense a bad movie, Slash doesn’t do much to separate itself from the pack as far as these exploding hutters go. Unfortunately, it doesn’t really stand out from the crowd even though, as noted earlier, clearly a lot of time and work went into the non-stop action scenes.

If you just can’t get enough of this type of stuff, Slash will satisfy your machine-guns-in-the-jungle craving. However, those seeking substance or something different may come away disappointed. But the third-world charm remains.

Classic Rombo! Jungle Rats might be the best Rombo, directed by Teddy Page; and Commando Invasion was probably the best movie by Jun Gallardo.

Got to love Rombo! Haha