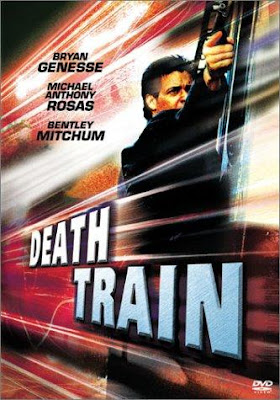 
When an annoying baddie named Weaver (Mitchum) and his gang of stereotype thugs (there’s a nerd, a woman, etc.) hijack a train, all hell breaks loose. They want to steal some diamonds and maybe shoot some hostages along the way. Stopping them from getting away is a man named Ryan (Genesse), a rogue agent of some law enforcement variety or other. He wears a long leather duster coat in the hot Bulgarian weather and he never runs out of ammo for his gun. Will he save the stereotype hostages (there’s a priest, a pregnant woman, etc.) and bring the baddies to justice? Has Ryan finally met his match with Weaver? And do you really care? We’re talkin’ Death Train here…

We never thought we would ever say this, but we finally found a movie that made us miss Derailed (2002). Death Train, sadly, has a lot of strikes against it: it came out in 2003, a death time for DTV, it’s one of the lesser Nu Image throwaways, there’s nil character development so you don’t care what’s going on, the movie is chock full of one-dimensional, stereotype characters, and on the whole it adds nothing new to the Die Hard/hostage genre and there are no surprises whatsoever. 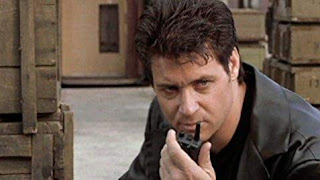 Instead of Derailed’s Van Damme, we have Bryan Genesse as our main hero. During the first half of the movie, he looks like a cross between Brendan Fraser and Jason Bateman. Bizarrely, during the second half he metamorphosizes into Daniel Baldwin. Just weird. As his bad-guy foil, Bentley Mitchum truly resembles David Cross. He even seems to take on some Cross-isms in his speech patterns as well. Just why we’re supposed to find a David Cross lookalike intimidating as an evildoer in any way remains unknown as of today. 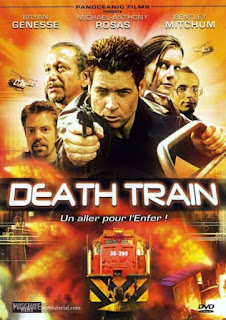 On top of all this muck, we have a mish-mash of mismatched train footage, culled from such movies as Danger Zone (1996) – remember Robert Downey Junior’s classic line from that one – Operation Delta Force (1997), Sweepers (1998), and City of Fear (2000). Nu Image must really like trains. Any episode of Thomas the Tank Engine is more compelling than this. It truly is a train slog.

Yes, there is an exploding helicopter, lots of shooting, and some beat-ups, but those elements alone do not a good movie make. There are some unintentionally funny parts as well. Those are some of the nicest things we can say about Death Train. We always try to see the positive, but this is really straining us. The movie needed a Wesley Snipes or a Kely McClung – somebody with some interest or charisma to keep things on track. Pun intended.

Not to be confused with the Arnold Vosloo Death Train (2005), if you’re looking for a train-based action movie, do watch or re-watch Under Siege 2: Dark Territory (1995). Death Train is…wait for it…a trainwreck.

Both Derailed and Death Train were filmed in the same place, so I guess Millennium got the train cheap. Mediocre movie.

It's a bit coincidental that you posted this review of Death Train, now with the on-going Corona virus epidemic. Since the main bad guy drank a Corona beer.

That's funny, but completely unintentional on our part! Haha. Just pure coincidence we have a massive backlog of reviews that goes back a year, so no way we could've predicted corona.