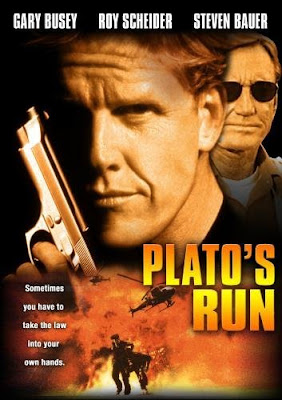 
Plato Smith (Busey), along with his fellow former-Navy SEAL buddies Sam (Bauer) and Dominick (Speakman), are just, to paraphrase both this movie, as well as the song by Ensiferum, “warriors without a war”. That all changes when a mysterious woman named Marta (Warden) enlists Plato and Sam to go to Cuba and extract the son of a powerful crime boss. At first they refuse, of course, but then they decide that the money is too good, especially because Plato’s business is failing and he’s going to be evicted from his house. Since Plato is trying to repair his relationship with his daughter Kathy (Myatt), it seems like a good move.

Of course, the job isn’t as cut-and-dry as it seems, and soon Plato is on the run because he was framed for the murder of said crime boss. Additionally, the REAL power behind the scenes, dastardly arms dealer Alex Senarkian (Scheider) is now testing/using/shipping mines all over the world and even has a mine testing facility at a secret, evil compound.

Things go from bad to worse when Kathy is kidnapped and Sam and Plato are trapped in the testing facility. With only their wits, and outside help from Dominick, will they be able to escape their doom. Will this be Plato’s last run?

Not to be confused with Hitman’s Run (1999) or Da Vinci’s War (1993), Plato’s Run is not exactly a movie you’d put at the top of your “to watch” list. To be fair, it’s better than Busey’s Warriors (1994), and about on par with the other Busey-Scheider team-up, The Rage (1997). It all starts promisingly enough – the power trio of Busey, Bauer, and Speakman are in a Florida bar and almost apropos of nothing, a very silly barfight ensues. But then it slows down and it all becomes a bit more standard. 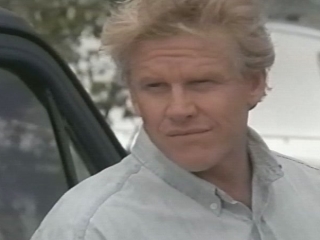 Yes, there are action scenes with shooting, blow-ups, beat-ups and the like. And while the movie is shot well, and it’s all very clear, somehow something is missing. Bauer and Busey had good chemistry together, which was all well and good, but the movie needed more Speakman. Certainly it needed more Speakman Martial Arts.

The plot is unnecessarily complicated. It should have been the big boss, Senarkian, sending out waves of baddies for our triumvirate of heroes to beat up. Instead, it gets bogged down with other things such as land mines, Busey running around a lot, and plot intrigue. The central baddie of Scheider can’t hold all that together.

Of course, we should have suspected all this because we knew two things going in: It’s a Nu-Image movie from 1997, and the director, James Becket, also made Ulterior Motives (1993). For those who may not remember, that’s the unfortunate Thomas Ian Griffith outing that somehow manages to botch the idea of TIG wielding a samurai sword. But that was Becket’s first movie. He should have picked up a few tricks by the time of Plato’s Run. It seems he did not, which is a shame.


Despite some well-placed humor, and the fact that the ingredients are all there for a successful DTV actioner, Plato’s Run, if we’re going to be brutally honest, is video store shelf-filler. We’re always looking for titles that rise above that sort of station, but, unfortunately, despite its good points, Plato’s Run doesn’t do that.

Also check out write-ups from our buddies, The DTVC and The Video Vacuum!
Posted by Ty at 20.2.20