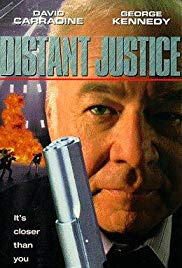 Inspector Rio Yuki (Sugawara) travels from Japan to Boston to not just take in the sights, but to visit with his old buddy Tom Bradfield (Kennedy), now a police chief. When Yuki’s wife Hiroko (Nogiwa) and his daughter Sakura (Sugawara – Bunta’s real-life daughter?) go off sightseeing while Tom and Rio reminisce about the old days, trouble finds them.

As they are wont to do, they begin taking photos during their trip. Unfortunately, they inadvertently snap a drug deal going on in the background. It turns out these aren’t just your run-of-the-mill drug fiends – a line (no pun intended) of corruption leads all the way to aspiring senator Joe Foley (Carradine).

After bad things happen to his family members, Rio is raging for real revenge. Bradfield can’t officially help him, so Rio goes rogue. Fellow cop Charlie Givens (Lutes) is there to help, but Rio, in essence, goes it alone. Will main baddie Roy Pennola (Lovelett) stand in his way? Because Rio comes from Japan, will Boston-area baddies feel a new kind of justice? Perhaps…DISTANT JUSTICE? 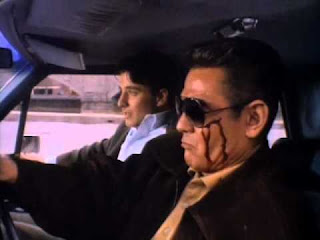 While it seems to have been written off as a Death Wish knockoff, Distant Justice has its own charm and isn’t any more or less Death Wish-y than many other revenge movies that came in Bronson’s wake. We love revenge movies here at Comeuppance Reviews and like to see them in any form they come in. This one just happens to have a man with an extremely thick Japanese accent as the main protagonist. C’est la vie. 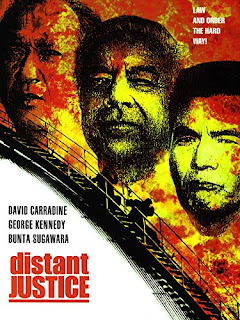 Distant Justice seems to be Toei Corporation’s attempt to make inroads into the American video market of the day. It features a mixture of Japanese and American actors and technical crew, much like the later (and far worse) Double Deception (2001). We don’t know if Toei thought Bunta Sugawara, who was a big name back home, could somehow translate into being an American star, but – intentionally or not – everything he says is gold. His voice alone is extremely entertaining.

He makes Gerald Okamura and Mako sound like Alistair Cooke. His accent is so heavy he even sounds like Schwarzenegger at times. Maybe Arnie was the model Toei was trying to emulate of a foreign star with limited English proficiency penetrating our American shores. But Sugawara’s effort, earnestness, and intensity are much appreciated and helped the movie a lot. 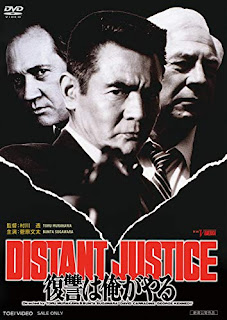 Another commendable thing about Distant Justice is how it completely avoids the Collision Course-esque “he likes hot dogs and he likes sushi” clichés. That’s not to say there aren’t plenty of humorous moments throughout the film, however. For a revenge tale featuring shooting, blow-ups, beat-ups, and even rapes, overall the movie is pretty funny. Case in point we have Sergeant Largent (Fiore). Could he be related to Hardcase and Fist’s Warden Borden? We may never know.

Now, it’s not without its faults, mainly in the plotting and pacing departments. You have to wait over an hour to get to David Carradine, and even at that there’s minimal Carradine. But what Carradine you get is good Carradine.

There isn’t a main, evil villain we as the audience keep checking in with throughout the film. We never visit with Roy as he shouts racial slurs about Rio and admonishes his underlings to make “no more mistakes!” – had there been a strong, central baddie the movie would have had more zest. And there’s an intro with some guys holding up a restaurant and then leaving the Yuki family stranded by the side of the road that really doesn’t need to be there. But fan favorite George Kennedy seems to be having fun, and the outing as a whole is just off-kilter enough to warrant at least one viewing.

Distant Justice is far from perfect, but it’s a pretty unique entry in the revenge film canon. Fans of the genre, George Kennedy, David Carradine, and Bunta Sugawara (if there are any out there in the English-speaking world) are encouraged to check it out.