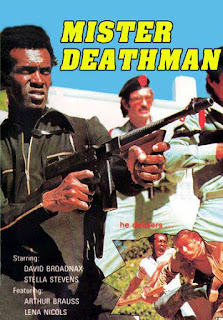 
Geoffrey Graves (Broadnax) is an international superspy, or secret agent, or something along those lines. After a run-in with two low-level mobsters, Graves somehow gets embroiled in a complex web of kidnapping, murder, and Stella Stevens. He has all the tricks up his sleeve that a James Bond-esque dude might have, which will come in handy as he fights his way towards the mysterious Mr. Czee. This entails a lot of intrigue in South Africa, which comes to a head in a very perplexing computer room. Who exactly is MISTER DEATHMAN? Is it Graves or is it someone else? Perhaps it’s now up for debate…


A movie that ends as abruptly as it begins (or at least that’s the case with the version we saw), Mister Deathman is more of a spy adventure than a pure action film, but it does have some action moments and blow-ups. It certainly follows in the footsteps of other South African outings like Cobra Force (1988) and Vengeance Cops (1971). Maybe we’re just watching the wrong South African movies, but it seems like the one common denominator to all of them is that they’re afraid to go full-out action. They all seem to pull their punches to a certain degree. Whether that’s down to censorship or some other reason, we have no way of knowing. 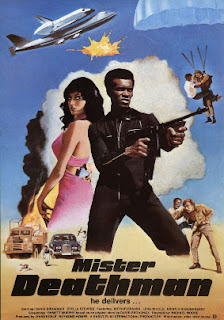 While we enjoyed David Broadnax as Graves, and there are some bright spots peppered throughout the movie, probably our favorite thing about it was the score. Unfortunately we don’t know the name of the composer as of now, but they did a fantastic job and it almost single-handedly keeps the movie afloat, especially in its slower moments (and there are plenty of those). Broadnax should have done more in his career. While the only other feature film he appeared in is Zombie Island Massacre (1984), he does get a “based on an original story by” credit here. Of course, he plays the lead as well. What ever happened to Broadnax?

Mister Deathman isn’t in any way bad, it just loses steam at a certain point and should have been more of a straight-ahead action movie. While it has a cool title, it doesn’t really live up to it, unfortunately. Low-budget, foreign-made variations on James Bond featuring a one-time lead actor are a tough sell for just about any potential viewers.

Perhaps that’s why it never received a wide release, including the U.S. It should be noted as a point of interest that director Michael Moore (and no, it’s not the Michael Moore that we unfortunately know today, but a Canadian gentleman who passed away in 2013) was the second unit director on Never Say Never Again (1983). Maybe he felt that qualified him to make his own Bond with Broadnax.

In the end, while this isn’t exactly essential viewing, it may appeal to those who enjoy undiscovered spy thrillers.