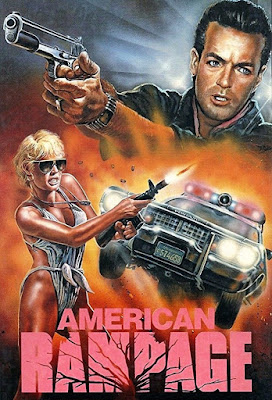 
Samantha Rork (Jane) is an L.A. vice cop who shoots first and asks questions later. She's teamed up with many different partners, among whom are Ryan Hayes (Elliott) and a certain man named Bart (Gates), but the important thing to know is that she really wants to bring down the drug pushers, pornographers, and other criminal lowlife scum of the city. Because this takes a toll on her mental state, she has therapy sessions with Police Psychiatrist (Donahue). He's so integral to her life, he doesn't have a name. Eventually she finds her way to the mansion of the main drug kingpin and yet another shootout ensues. Is Sam Rork going on a classic AMERICAN RAMPAGE?

We really loved American Rampage. It's completely fun from start to finish, in a Samurai Cop (1991), Death Flash (1986), or Savage Harbor (1987) kind of way. It's silly, it's utterly ridiculous, and it's totally 80's. In other words...awesome. The soundtrack is washed in synthesizers, and there's a scene at a mall (apparently the South Bay Mall somewhere in Southern California) where the synths blast, and director DeCoteau has a brief cameo. Hayes, one of Sam's many partners on the police force, is perhaps the only cop in recent memory to wear a stonewashed jacket with the collar up. Most of the male characters in the film have some form of mullet, making the Mullet Per Minute (or MPM) quotient higher here than in any other movie in memory.


Porn purveyor John T. Bone plays - you guessed it - a pornographer. His name in the film is Mike Raisin. Many other characters have silly names like that. All of the characters and their motivations are spelled out during a lengthy slide show sequence towards the beginning of the film. It's a cheat sheet of sorts for the goings-on of American Rampage. Fan favorite Linnea Quigley plays a drug courier who takes a shower and then dies. There is a ton of hilariously gratuitous nudity, including from fellow fan favorite Michelle Bauer, and a woman named Jasae, who appeared in Road House (1989). 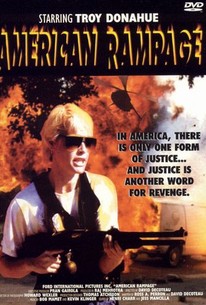 It all starts out with the time-honored convenience store shootout, where many bottles of New York Seltzer meet their demise. And not just New York Seltzer, but also Zeltzer Seltzer. Lots of carbonated water goes flat in this sequence. This sets the tone for all the fun to be had throughout the rest of the film. Of course, there is a classic WYC (White Yelling Chief) that Sam and her partners have to contend with. It's a shame that Kary Jane (credited as only Kary J. on the film, and many of the other actors only did initials or pseudonyms as well) did only this movie. She could have been a rival to Brigitte Nielsen at the time.

While American Rampage received a U.S. DVD release back in 1998 on the low-budget Simitar label, thankfully, Massacre Video has now rescued the film and released it on Blu-ray. Not only did they pair it with the Dan Haggerty film Danger USA (1989), but there is a commentary track by DeCoteau and producer Raj Mehrotra. Also included is a deleted scene that features Linnea Quigley that previously was only available on the French VHS release.

While you can't hear Mehrotra too well on the commentary track, DeCoteau does most of the talking anyway, and he repeatedly mentions PM and AIP productions as his contemporaries at the time. He also namechecks Amir Shervan and Hollywood Cop (1987). He even mentions that a stuntman who worked on American Rampage later died doing a stunt on a PM film, but he doesn't mention their name. There are numerous instances where DeCoteau and Mehrotra crack up laughing during the track. They do mention that the genesis for the film was that foreign markets want "American guns, American cars, American cops, and American girls". Hence, the name American Rampage.

That formula does makes sense, if you look at how many movies were released at the time with the word "American" in them, which we talked about on one of our podcasts. This even goes to low-budget foreign productions like American Hunter (1989). As long as people in other countries view America as the zany universe that American Rampage takes place in, I'm okay with that. I wish we lived in a world where Sam Rork always was there for us and always had our back.

For a thoroughly enjoyable and mirth-filled night of entertainment, it's hard to beat American Rampage. It has a rough-hewn homemade charm that’s easy to love. The Blu-ray is a standout, and keeping in mind that we have nothing to do with Massacre Video and they probably don't even know we exist, we absolutely recommend purchasing their American Rampage/Danger USA release. You won't regret it.

If there was a Movie Review Hall of Fame, you guys would be first-ballot nominees. This site simply is stellar.

Online connectivity has allowed me to learn there are like-minded folks out there who appreciate a cheesy 80s-fest just as much as I do.

And for the record, just because I don't comment on every post doesn't mean they aren't read. I enjoy them all.

Speaking of enjoying them all, I'm a big fan of many of those aforementioned "American" titled cinematic outputs.

Stellar as usual, gentlemen. Keep up the fantastic work!

Thanks once again for the kind words, Joe!

Glad to see we're on the same wavelength about 80's "American" movies and everything else.

Thanks again for being a fan!

Just got done watching this on DVD, classic film. BTW what was the deleted scene about in question? Don't really want to buy the Blu-Ray just for that.