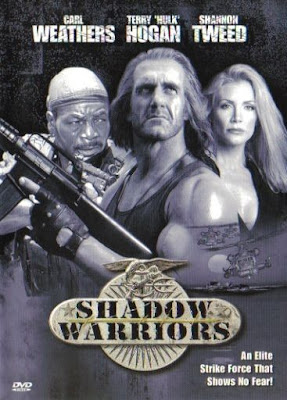 
Mike McBride (Hulk), Roy Brown (Weathers), Hunter Wiley (Tweed), and possibly some other guy are the SHADOW WARRIORS. They’re a team of mercenaries, but they’re good mercenaries who rescue kidnapped children and fight terrorists. But that’s only, in true A-Team fashion, “if you can find them”. Tasked with fighting some baddies with chemical weapons and ballistic missiles, our Shadow Warrior team snaps into action. They even enlist the help of their buddy Andy Powers (Kove), sort of an auxiliary Shadow Warrior. The only problem is McBride was injected with some sort of poison and is slowly dying. Can he get an antidote in time? Will they stop the launch of the missile? Will they save the children? WHAT’S GONNA HAPPEN?!?!

Shadow Warriors: Assault On Death Mountain is a made-for-TV (TNT to be exact) outing, and you can really feel it. It feels like a pilot for a show that was never picked up, and it would have been (and should have been) a syndicated series that would air after Xena or Hercules or Relic Hunter on channel 9 on Saturday afternoon. That’s not to say there isn’t action – there are plenty of shootouts, fights, chases, blow-ups and the like. But it feels sanitized, and the whole outing is very paint-by-numbers.

That being said, there are plenty of funny moments to be had. Hulk Hogan attempting to act “troubled” is worth the price of admission alone. The Hulkster mows down middle-Eastern terrorists holding two large machine guns, and later gets the old Prerequisite Torture treatment. Carl Weathers brings his trademark charisma, and Shannon Tweed practically salvages the whole thing just by being there. Of course, you do get some classic Tweed-Fu. Martin Kove seems to be going for the David Letterman look of the day. They all walk in slow motion away from an explosion, and Hulk Hogan punches people on a hovercraft. So it’s not a total loss.

The whole thing is rife with stereotypes and stupidity, as you might expect from another pairing of director Cassar with Hulk Hogan around the same time as The Ultimate Weapon (1998). But you shouldn’t go in expecting more than that, and there is fun to be had with what’s there.

So, if you’re willing to accept “The B-Team”, you could do a lot worse than Shadow Warriors: Assault on Death Mountain.