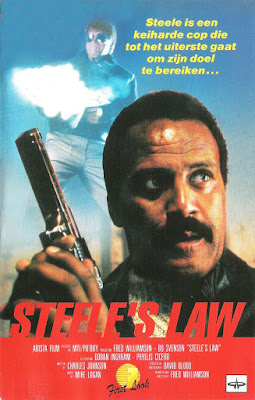 Lt. John Steele (Fred) - not to be confused with the John Steele from Steele Justice (1987), who is a different person that you unleash - is a Chicago cop with a bad attitude. Surprisingly, he also plays by his own rules. When some FBI suits recruit Steele to foil a terrorist plot, he travels to Dallas to stop an assassination attempt. In this case, a maniacal baddie named Joe Keno (Ingram, whose name may be spelled incorrectly in the credits) is planning on killing the Iraqi ambassador.

Once in the Lone Star state, Steele makes fast friends with Sheriff Barnes (Svenson) and the mission begins. Along the way, Steele, Barnes, and his contact, "Peacekeeper" face all sorts of trials and tribulations, usually ending with Steele's coolness saving the day. But will Steele be able to change the course of the first Gulf War? Find out today...

Released the year before Three Days to a Kill (1992), Steele's Law is likely the first Snizzlefritz production. Three Days is the second Snizzlefritz production. Now that that's cleared up, we can say that Steele's Law faithfully follows the Fred formula. It's far from fantastic, but it's fine for his followers. In fact, the film is fairly fun. If you have seen and liked other Fred Williamson movies, you will know what to expect and you'll probably dig what he's layin' down.

Certain ideas, themes, and even scenes and character types appear again and again in the Fred canon. He won't get much credit in the snooty circles for being an auteur, but that's what he truly was, if I understand the definition of auteur correctly. Maybe it's because certain gay-stereotype characters and/or prostitutes are played for laughs, which is un-PC these days.

But so is Steele's rogue cowboy ways and tough-guy masculinity. That's why people are re-discovering these movies. They don't make 'em like this anymore. Or maybe it's because all of his movies have scenes with loud incidental music that drowns out the dialogue. Either way, Fred is an American Original. Even his films that aren't top-flight have something worth watching going on. Steele's Law is no exception.


For example, Steele's Law gets going instantly with a slam-bang opening scene. He's tough and cool right from the jump, and is a master of weaponry, as we soon see. But, inevitably, he has to go from street action to the office of his Chief, just as night follows day. He isn't quite a BYC, but he teeters on the edge. He also has questionable hair. Steele displays more of his classic bad attitude, but he agrees to go after his former nemesis, Keno. 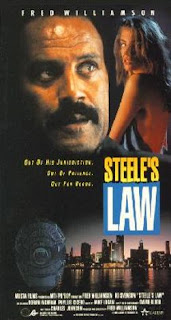 Once in Dallas he gets into a classic Barfight, but probably the trainyard fight trumps it as a movie highlight. As is typically the case, there are some doldrums in the film during the course of the reasonable 90-minute running time. Perhaps this is best exemplified when we see Steele casually cross a street - the whole street - while the 'Don't Walk' sign is lit. What a badass. We then see him walk back from where he came from. Every step. We're not sure why this was necessary, as scenes like this tend to lessen the overall intensity of the film, but perhaps it was there to build character. We now know Steele has a cool walk. Wait, didn't we already know that? Well, anyway...

Other highlights include the Mike Logan score (presumably not the character from Law & Order), even if it does blare while characters are talking. But that's not Logan's fault.

Also, when Steele is teamed up with Peacekeeper - which was the working title for the film but they must have been familiar with Dolph's The Peacekeeper from 1997 - we get a classic "cool guy meets nerd and they're the Original Odd Couple" scenario, recently seen between Matt McColm and Clint Howard in Body Armor, also from 1997. And you've got to see the cell phones used in this movie. They're awesome. If anyone ever starts a cell phone museum, they should consult Steele's Law as a reference point. It almost makes the whole thing worth seeing right there. 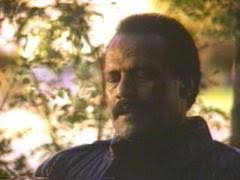 It appears that Steele's Law is one of the rarer Fred movies, at least here in the U.S. However, you can still find those cheaply-produced "gas station" DVDs that are floating around out there. That's what we stumbled across at the Salvation Army. If you do see one, pick it up. It won't kill ya. Especially if you're a Fred fan. And if you're not...why not?