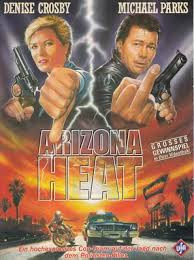 
Larry Kapinski (Parks) is a man perfectly suited to be named Larry Kapinski. He’s rude, crude, and has a bad attitude. He’s a male chauvinist pig and naturally he thinks he’s God’s gift to womankind. His favorite hobbies include drinking beer and womanizing. He’s also a cop, and when his WYC (White Yelling Chief) teams him up with his new partner Jill Andrews (Crosby), they are, to quote the great Collision Course, “As different as hot dogs and sushi!”, but instead of being American and Japanese as in that film, in this case it’s American and Lesbian. Well, you know what we mean. We don’t want to be accused of being as sexist as Larry Kapinski.


While Jill and Larry are constantly bickering back and forth about the nature of men and women in society, an evil, insidious cop killer is roaming around Arizona. Will they be able to get along long enough to catch the baddie? Or Will Kapinski’s actions finally send the well-meaning Jill over the edge? Will anyone be able to stand the ARIZONA HEAT? 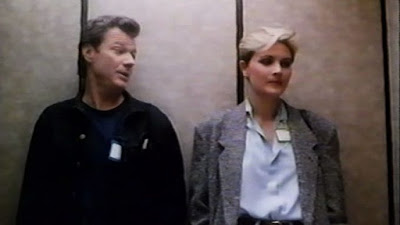 Arizona Heat can fall neatly in the “mismatched buddy cop” drama/thriller/action/comedy vein of the aforementioned Collision Course or perhaps Red Heat (1988). Even both titles include the word “Heat”. On the one hand, we want to applaud Arizona Heat for including a lot of un-PC dialogue.

On the other hand, a lot of other dialogue in the movie is juvenile and sophomoric. It becomes very repetitive after a while. It spins its wheels and loses momentum. “Yes! We get it! You two are different!” you may be yelling at the screen as the movie is still drilling this point home at around the 80 minute mark even though we as viewers understand the conflict right from the jump.


To be fair, Arizona Heat does have some good qualities as well besides the lack of political correctness (although the fact that the Chief is in a wheelchair, and the fact that he teamed Kapinski up with a lesbian just for the sake of it would seem to indicate otherwise).

The soundtrack features the time-honored wailing electric guitar riffs we’ve come to expect of 80’s actioners. There’s a quality (although silly) car chase scene and some shootouts. It was a change to see Michael Parks in a rare non-baddie role, and it’s always nice to see Denise Crosby. There’s a peppering of goofy humor throughout the whole thing, and the bottom line is they just don’t make movies like this anymore. It may be worth seeing for archival value alone. 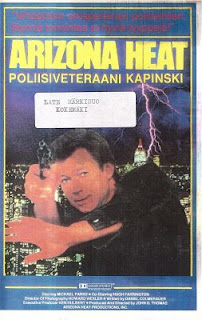 Arizona Heat was director John G. Thomas’s next effort after Banzai Runner (1987). Perhaps the video store era should’ve been kinder to Thomas, because he didn’t direct anything after ‘Heat until 1994. Part of the reason for that might be Republic Pictures’s awful VHS box art.

Whoever designed this cover completely failed when it came to highlighting the movie’s strengths, or really making it eye-catching in any way. While it was distributed well throughout the U.S., no one had any reason to take this generically-packaged tape off the shelf. That error was very much corrected by the fantastic European art. Not too many paintings feature a guy giving you the finger. Much less a likeness of Michael Parks. Much less next to Denise Crosby giving him the thumbs-down. Now that’s how you do fantastic artwork to promote your movie.

The end-credits song, “Caught In the Heat”, by Gary Stockdale, is a winner. So much so that they should have used it in the movie proper, perhaps a scene of Crosby and/or Parks training or working out. They could have taken out a scene of them bickering and put that in. That would have improved things.

In the end, Arizona Heat is a glass-half-empty or glass-half-full situation. You could either see it as a movie with a lot of silliness and some unpleasant dialogue and situations, or you could see it as an 80’s artifact with some redeeming qualities. Either way, however, it’s the type of film that will never be made again. Let’s all concentrate on that aspect of it all.

This was one of the worst action movies I’ve watched, and I use the term ”action” loosely. Both Parks and Crosby had unthankful roles. The European cover is much too good for this one.

We totally agree. The cover is better than the movie.