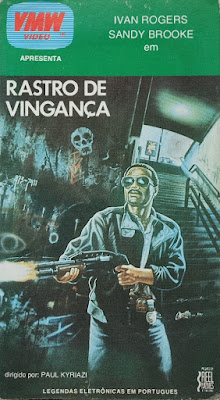 
Detective Joe Weeks (Rogers) is a Cop On The Edge (or COTE), who naturally has to deal with a White Yelling Chief (or WYC), Captain Toback (Sutherlin). A man of strong and, some may say, silent emotion, Weeks takes many risks and chances in life. This is because after something unspeakable happened to his wife, he became not just sullen and withdrawn, but suicidal as well.

Now teamed with an attractive female partner (Brooke), the two must break up the ring of crime lord Frank Hanna (Irk). But it’s not going to be easy, as Hanna has many goons to contend with and many trials and tribulations occur along the way – not the least of which is when Weeks has to turn in his badge and gun and go rogue. But will it be a conspiracy that goes all the way to the top? We implore you to find out…


We’ve met our new hero, and his name is Ivan Rogers. This awesome man wrote, produced, and starred in One Way Out – not to be confused with One Man Out (1989), One Man War (1990), One Man Force (1989), or many other similar titles. He’s a man of few words. Very few. There are many instances when you think he’s going to speak, as any normal person would, and then he doesn’t, which is funny. Because he has a soft voice and it’s post-dubbed, whenever he speaks, that’s funny too. You can’t lose. He’s a man who shoots first and doesn’t say anything at all later. He looks like a mélange of Philip Michael Thomas, Billy Dee Williams, Giancarlo Esposito, and Richard Pryor. We want to see more. 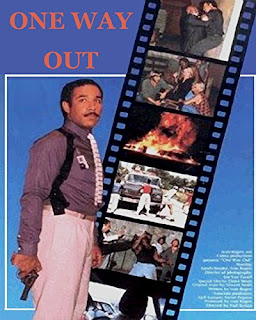 Director Paul Kyriazi, known to action fans as the director of Ron Marchini outings Death Machines (1976) and Omega Cop (1990), here has a different strong, formidable main star. But it should give you an idea of what you’re in for: an awesomely 80’s ride filled with wonderfully “off” pacing, silly voices and sound effects, and a low-budget charm that can’t be beat.

The audio alone is fantastically entertaining. The voices are funny. The gunshots are funny. Every kick is funny. Every punch is funny. Scenes go on awkwardly/too long. And there’s a man that when he speaks his voice is distorted as if he’s going through the McDonald’s drive-thru. Just to be clear, he’s not. You gotta love it. Also they show the main title twice during the opening credits.


You know you’re in for something special when one of the other opening credits is “And Abdullah the Great as Mike”. And it only gets better from there on in. The score by Vincent Smith is also noteworthy. It’s funky, it’s synthy, it’s percussive, and there are a lot of really great cues. It really could use a re-release. Forget “Axel F”. Get ready for “Ivan R.” They even found time to use a Watchtower song, “Violent Change”, from the Energetic Disassembly album. It blares out of a boombox in one of the top 35 most ridiculous(lyawesome) scenes in the movie. One Way Out really delivers the goods.


It’s a ton of fun in that AIP-esque, Leo Fong-meets-Chuck-Jeffreys-with-a-dusting-of-Miami-Connection kind of way. Just one of the millions of reasons the 80’s were great is that it was before all this annoying irony and people were actually earnest and hardworking. It just so happens that this movie, One Way Out, is an entertaining blast to watch and will put a smile on your face, guaranteed. And what’s wrong with that?

Email ThisBlogThis!Share to TwitterShare to FacebookShare to Pinterest
Labels: 1987, 3 and a half stars, Abdullah The Great, Doug Irk, Ivan Rogers, One Way Out, Rich Sutherlin, Sandy Brooke, Violent Change, Watchtower

I have seen this one and Ballbuster, of which this was the better Ivan R. movie. Talk about rare movies.

We've haven't seen B-buster yet, but we want to. It's difficult to find. We've seen Tigershark written by the man himself (Ivan Rogers), but he wasn't in it unfortunately.

Cool thanks! We'll be watching it soon.