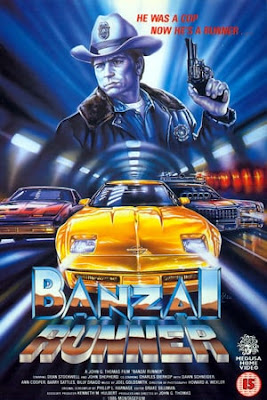 Billy Baxter (Stockwell) is a likable Highway Patrolman who is getting fed up with two things: drunk drivers and so-called “Banzai Runners” – rich guys with crazy-fast cars who zoom by at 150-200 miles per hour between L.A. and Las Vegas. Perhaps one of the reasons Baxter has such a vendetta against them is that his brother was killed in a road accident and now he takes care of Beck (Shepherd), his son. When the top brass declines Billy’s request to soup up his police cruiser so he can keep up with the Banzai Runners, Billy decides to go rogue: he turns to friend and mechanic Traven (Dierkop) on the sly. The eccentric Traven agrees to put in a turbo engine, but then Baxter is forced to turn in his badge (we don’t think he had a gun).

Now free to take down the speeding suckers his own way, he goes undercover to infiltrate the shadowy world of Banzai Runners. While there, he comes face to face with Syszek (Drago), the evil ‘Runner. Now with Beck at his side, and their girlfriends (Schneider and Kenworthy) more or less against them, the time has come…will the Baxters put an end to all this Banzai Running once and for all?

Banzai Runner was a pleasant surprise and part of the reason why continually hunting down 80’s VHS tapes is still worth doing. Is the movie an earth-shattering experience that will forever change the way you look at life? No, but most movies aren’t that anyway. What Banzai Runner is is an unpretentious, enjoyable gem and a worthwhile way to spend 90 minutes or so. 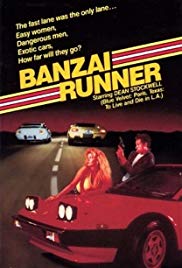 As some sort of cross between Midnite Spares (1983) and No Man’s Land (1987), Banzai Runner is a fast-cars-vroom-vroom movie of the type that the male gender is always accused of loving above all others. There’s actually a little more going on here than that description would imply, but it would be nice if Banzai Runner was given a bit of credit for being a precursor to the Fast and Furious franchise – and all at a tiny fraction of the budget of those blockbusters.

It all starts with an appropriately high-speed intro, but the presence of Dean Stockwell as the main character gives the film some grounding and gravitas. The whole thing has kind of an off-kilter, unusual vibe that we really liked. It’s really the type of movie you can’t do today, and that’s a shame.

Yes, it does drag (no pun intended) a bit in the middle, but that’s a common problem and easily overlooked. Especially in light of the introduction of “speed stripping” into the popular consciousness. Evidently this is when if the driver of a car stays over the speed limit for enough miles at a time, the passenger has to strip. This isn’t to be confused with another car movie, Strip N’ Run (2000) with Michael Madsen. Anyway, this can also be noted as yet another movie where Billy Drago plays the bad guy.

There is some really cool and catchy music on the soundtrack too, including by a band named Los Bad Jamming Gringos, who sound like a slightly more aggressive ZZ Top. The score itself isn’t bad, but it would have been perfect if it had a Tangerine Dream-style synth score. To date, neither the score nor the soundtrack songs have been released on any format, which is unfortunate.

It was the go-go 80’s, so of course there are going to be movies about fast cars and fast women and all that. But the organic, straightforward, and almost unassuming charm of Banzai Runner make it worth seeing.