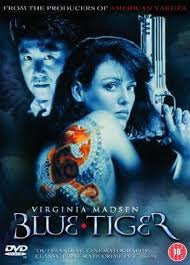 
Gina Hayes (Madsen) is a loving single mother to her young son Darin (Mortensen). When Darin is shot in the crossfire of a Yakuza war, Gina drops whatever it was she was doing, learns Japanese, dyes her hair black, and puts on her leather revenge jacket. She obsessively and single-mindedly attempts to track down her son’s murderer, and her only clue (because the assailant wore a mask) is that he has a very recognizable tattoo on his chest.


She gets a job as a waitress in a dance club where the Yakuza hangs out, then begins the laborious process of coming up with reasons for all of them to get shirtless so she can identify the killer. When ailing tattoo master Smith (Stanton) emblazons her body with a certain red dragon, it signals that she is close to fulfilling her mission. But the Yakuza is getting wise, her friend Emily (Varda) is against her, and “Asian Crimes Inspector” Lt. Sakagami (Okumoto) is on her trail. With time running out, she must unravel the true nature of her newfound relationship with Seiji (Nakamura). Who – or what – is the real meaning of BLUE TIGER?

Virginia Madsen versus the Yakuza. Killer idea. Thankfully, the movie more or less delivers. It’s well-shot and technically is quality all the way around. It can certainly stand with other movies cut from a similar cloth such as American Yakuza (1993), American Dragons (1998), and White Tiger (1996). It’s noticeably better than Distant Justice (1992), another American-Japanese co-production from the same era.

While it does feature some beat-ups and shooting (including a noteworthy, classic-90’s drive-by), we’re not in PM territory here. The movie concentrates largely on drama, but is punctuated at appropriate times with well-executed action scenes. The Japanese actors acquit themselves well as usual, and the presence of top-flight actors like Madsen, fan favorite Harry Dean Stanton, and No Retreat No Surrender’s Dean Hallo really help things. Virginia’s brother Michael has a cameo as a gun dealer for the classic scene where the revenge-seeker (in this case Virginia, of course) goes to a gun range and learns to shoot.


Blue Tiger is a worthy addition to the revenge movie canon. Thanks to films like this one, video stores in a now-bygone era had added color and interest. It’s all very professional and serious-minded. Perhaps too much so: it actually could have been more exploitative and trashy, but that was eschewed. The plot is a bit slow-moving in the middle, but it rights itself.

Just ordered this, looking forward to it!