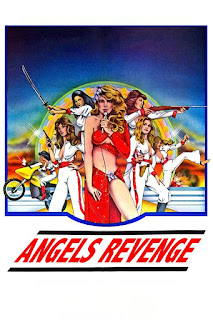 
Elaine (Robin Greer), April (Cole), Kako (Chinh), Michelle (Kiger), Terry (Anderson), Maria (Velasco), and their young assistant Trish (Liza Greer) are a special team of ladies assembled to take down drug gangs and evil militias in the L.A. area. All of them take time out from their day jobs when a baddie named Mike Farrell (Palance, not the guy from MASH) starts causing havoc all over town. Using their unique skill sets, and feminine wiles of course, they proceed to take down the bad guys in their own inimitable way. Armed with a high-tech van (it was the 70’s after all), can any force on earth stop the ANGELS BRIGADE?

A light, frothy, and some may say inconsequential bit of fun, this PG-rated actioner was clearly inspired by some of the TV shows of the day, most obviously Charlie’s Angels (Neville Brand plays their “Charlie”, but you can see him), but also The A-Team (hence the van), Wonder Woman, Knight Rider, and The Bionic Woman also come to mind. Even with the alternate titles, Angels Revenge and Seven Angels, the word “Angels” was never dispensed with.

Although clearly inspired by those shows, Angels’ Brigade was also somewhat ahead of its time, as teams-of-deadly-women movies mostly came later in the 80’s and into the 90’s with such films as Hell Squad (1986), Mankillers (1987), and Sweet Justice (1992), among others. The film is also reminiscent of the Cheri Caffaro Ginger series as well as Caffaro’s Savage Sisters AKA Ebony Ivory and Jade (1974). 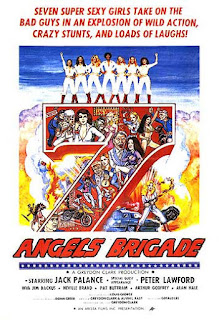 There are lots of stunts, shootings, and blow-ups, and it’s all very comic-booky, as reinforced by the “wacky” scene transitions and star-wipes and such. A lot of what we see is in the editing that way, such as the very cool opening credits sequence and a terrific montage as the ladies prepare for battle with their matching outfits and classic 70’s van. We did think, however, that with a little less goofing around the film as a whole could have been stronger. There’s only so many times you can hear the sound “BOINGGGGG!” during a fight scene before you realize the unserious vibe of the whole thing.


The girl power message of Angels’ Brigade is reinforced by the fact that the ladies are not just a formidable fighting force, but they all had good, independent jobs outside of their Brigade duties. There’s no nudity and the exploitation factor is low.


The character of Michelle is a professional singer, for example, and a movie highlight comes when we see her Vegas act, and Susan Kiger performs the song “Shine Your Love On Me” by Patty Foley for a reasonably enthusiastic crowd. Interestingly, Kiger was also in the movie Seven (1979), directed by Andy Sidaris, the same year as Angels’ Brigade. Apparently she felt safe with that number, having appeared in two movies with the number seven in one year. Coincidence? 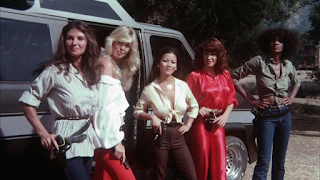 As if the eye candy wasn’t enough, director Clark also brought on board what are basically a series of short cameos by not just Jack Palance and Neville Brand, but also Alan Hale, Peter Lawford, and Jim Backus, and there’s special mention of “Arthur Godfrey as himself”. Godfrey was an entertainer from a previous era of American history and his appearance in Angels’ Brigade was during the swan song of his life and career. An interesting way to go out, to be sure.

In the end, while Angels’ Brigade has a positive, upbeat overall feeling to it, and is reasonably enjoyable for what it is (and not nearly as bad as some people seem to think), its one-dimensionality more or less sinks it in the end. But, then again, perhaps we’re overthinking it and it wasn’t meant to be examined that closely.

For those of you out there seeking undemanding entertainment from the disco 70’s, you could do a heck of a lot worse than Angels’ Brigade. At the very least, it’s a one-time watch.

The A-Team premiered in 1983. Four years after this movie came out. Maybe The A-Team was inspired by this!

Yeah probably! and Charlie's Angels too.