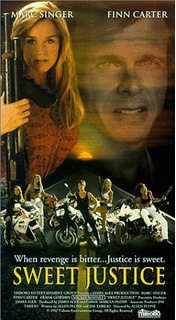 Sunny Justice (Carter) is a spunky female kickboxer not afraid to take on a man in the ring. This quality is going to come in handy, because she stumbles onto a small-town conspiracy that could go, eventually, all the way to the top. Upon the death of her sister Suzanne (Paris), the mayor of a dusty ol’ town named Los Olivos, Sunny returns home, and after speaking to the Sheriff and Suzanne’s boyfriend, Steve Colton (Singer), and local yokel Zeke (Rooney), she discovers the culprit: an evil land developer (yes, another one!) named Rivas (Gorshin) who is also dumping toxic waste into the old mine (presumably where Timmy from Lassie got stuck every week). Deciding  to cut through the bureaucratic red tape, Sunny reconvenes her old commando unit, an all-female fighting force sanctioned by the U.S. Army. Here is the team, along with some of their relevant credits:

Will this power-packed team of fighting women get to the bottom of the conspiracy and get their man? Find out today!

Sweet Justice is essentially a cross between Hell Squad (1986), China O’Brien (1990), and Frame Up (1991). To paraphrase our friend Cool Target, the first 30 minutes are kind of slow, but after that, things pick up and become very enjoyable. In Frame Up, the Evil Land Developer (perhaps we should start now capitalizing it and calling them ELD’s for short, we see them so much) was Dick Sargent, and here it’s Frank Gorshin. Maybe aging TV actors are drawn to the role because it’s so perfunctory? It must be like a working retirement for them. Gorshin puts in a wacky performance, even Riddler-esque you might say? Mickey “Maximum Force” Rooney (he’s synonymous with Maximum Force, isn’t he?) puts in a top-notch sit-down role, but to be fair, it’s tough to tell whether he’s standing or not because of his height. When one of Rivas’s goons punches Zeke in the face, that’s when all bets are off and the girls get their SWEET JUSTICE.

It’s your classic “assemble a team” movie, and we always enjoy those. You really have to admire anyone who’s willing to drop their job to go on an illegal killing spree with their buddies just because one of them enlists you to. There’s even a classic training montage and shreddin’ guitars play on the soundtrack during fights. You’ve gotta love it. The women and their diverse personalities and fighting styles keep it from becoming boring. We thought another title for the movie (or another like it in the future) could be “EMPOWERMENT”.  You get the idea.

The team leader, Sunny Justice, is a pre-The Fight (2001) woman who takes on men in the ring. She was truly ahead of her time. And in Street Corner Justice (1996), Marc Singer played the immortal Mike Justus. Sunny Justice and Mike Justus together again at last. We celebrated. Singer has never looked more like Kevin Bacon than he does here. Maybe it’s the hair. While Finn Carter takes on the Cynthia Rothrock role from the aforementioned China O’Brien (there’s even a fight in a gym just like in that movie), we thought that if Sweet Justice were made today, the part of Sunny Justice could be portrayed by Gina Carano.

Featuring the prerequisite sax on the soundtrack, as well as end credits ballad “The Glory of it All” by Sherry Cameron, Sweet Justice is rollicking entertainment, perfect for video stores of the 90’s. Released by Triboro on VHS at that time, Sweet Justice is sweet viewing.

By this point in the website's life span, I expect nothing but the best from you two.

Once again, you deliver GOLD. It amazes me how consistently excellent your write-ups are. This one, yet again, delivers the goods.

I loved how you gave an mini-bio breakdown of the actresses in the middle of the piece. That was a nice touch.

This sounds like a great premise. There are a million and one "former soldiers get the platoon back together to right wrongs" but to see it done with reasonably attractive women was a nice touch.

Great call with China O'Brien. I have to admit, that was the first thing that came to my mind within a minute of reading the piece. Speaking of which, I don't know whether they were saving money or what, but THIS MOVIE SCREAMS CYNTHIA ROTHROCK. She could have done this in her sleep.

Thank you for the nice words once again! We really appreciate it. Cynthia never really made a former soldier platoon team up movie. It's not too late.

Haha! Oh right, we have to watch that one of these days.