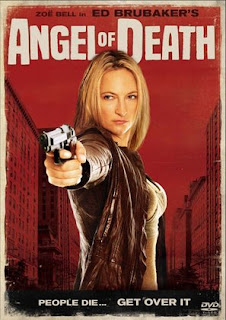 
Eve (Bell) is a hitwoman in L.A. On one of her missions, during the course of a fight, she receives a head injury. Although she recovers, she begins seeing visions of a young girl who got caught in the crossfire. While trying not to get too distracted by this, she begins her revenge mission against the underworld mafia types who become the target of her ire. Meanwhile, she has to juggle the needs of certain people in her life, like her co-worker Franklin (Huen), her neighbor Vera (Lawless), her doctor, Rankin (Jones), among others. Not to mention there are enemies on her tail and the law wants to catch up with her. Is Eve the ANGEL OF DEATH for the baddies?


We really liked Zoe Bell in this. She especially shines in the fight scenes, and those are well-executed and fun to watch. There perhaps should have been one or two more of them, but the bathroom fight scene is definitely a highlight. The movie around her, unfortunately, is not that great. There's a certain heartlessness to it. There's a lot of stupid, mindless dialogue and the plot is nothing you haven't seen before. It reminded us of The Contract (1999) or Bounty Hunters (2011). It's not quite a Tarantino Slog, but it certainly has Tarantino Slog-esque tendencies. 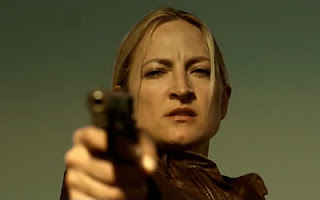 Because it was originally a web series that was edited into movie form, the running time is only 77 minutes, which we greatly appreciated. More movies should have that length. And because Ed Brubaker, who apparently is well known in the comics world, has a credit of 'Written and Created By', there is a definite comic-bookiness to the visuals. This comes out most obviously in the panels that we sometimes see. The score is Hendrix-like blues rock guitar and it more or less suits the film.

Ted Raimi has a cameo and Lucy Lawless has a small role as well. Both were involved with the TV series Ash Vs. Evil Dead - could there be a connection from that to this? Or is it just a coincidence? In other casting news, both Eve's boss and the main villain were both Fugitive Champion-esque twerps. It was hard to tell them apart because not only did they look alike, the baddie wasn't at all scary or threatening. He tried to be, but it just seemed like he'd be late for his high school classes. I guess it's all part of the experience.

All in all, Angel of Death could have - and should have - been better (especially in the writing department), but Bell is engaging as usual and she helps to keep things afloat. It's sort of a "cheap, quick, and dirty" type production, and there are worse ways to spend 77 minutes.

Zoe Bell was the stunt double for Lucy Lawless on Xena, which also had Ted Raimi in the cast.

Cool! That explains it. Thanks for the info