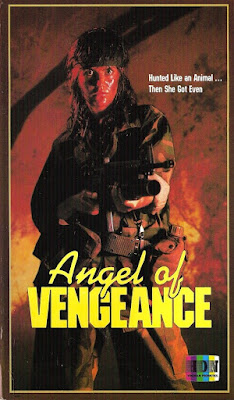 
Tina Davenport (Poynter) arrives in a small California town, and all she wants to do is write a biography of her late father, a Green Beret. In her off hours, she goes spear fishing and sings Bob Dylan songs in the woods. Her rural idyll is spoiled when she stumbles upon a rumble between a local dirtbike gang, The Thrill Killers, and a self-made platoon of Doomsday Preppers out in the desert. Knowing she’s got what it takes, she makes an offer to Head Prepper Major Hargrove (O’Hara) to have him and his comrades hunt her in the desert, Most Dangerous Game-style. Naturally, they agree, but she then begins to turn the tables on them as the battle for survival turns deadly…for them! As if all that wasn’t enough, a duo of “Random Killers” (that’s actually how they’re credited) are on the loose and causing havoc. Will Bo Gritz make a surprise appearance? Or maybe Blake Bahner? One never knows, but one thing we do know: Tina Davenport is the ANGEL OF VENGEANCE!

Finally, here is the mashup of Savage Justice (1988) and Savage Instinct (1991) we’ve all been waiting to see. It’s a little surprising they didn’t call this Savage Angel. Anyway, director Ted V. Mikels brings the no-budget drive-in horror/exploitation style we all know from such classics as The Corpse Grinders (1971) and Blood Orgy of the She-Devils (1973) to this, but here applies it to an action romp. The idea of dirtbikers vs. Preppers in some sort of a desert-set brawl is a good one, and introducing a tough-gal character like Tina into the mix amps things up even more, but, sadly, the movie overall doesn’t live up to that promise.

That’s not to say there aren’t some points in the win column for Angel of Vengeance. It’s populated by a lot of people with interesting faces, and the desert setting is a good one (we’re told, quite threateningly, by Hargrove that “It’s a box canyon!!”). The dirtbikers haven’t graduated to the leather jackets of their Harley-riding counterparts, so they all have Thrill Killers M.C. T-shirts. Not quite as intimidating, but they’re getting there. It’s like training wheels. The Preppers love camouflage – not just their outfits, but their truck and their hideout are all camouflage. It’s a wonder we can see them at all. (Not to rain on their parade, but it’s all green camo in the desert, which doesn’t help all that much.) 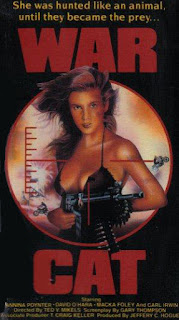 Happily, Angel of Vengeance is a scant 73 minutes (on Amazon Prime anyway). It still felt a little long because not a lot happens and there isn’t really any character development to speak of, but it’s still better than 90-plus minutes. So while the majority of the goings-on are outdoors and characters’ voices still sound marred by microphone distortion, it never gets too bothersome because it all ends relatively quickly. While this is the only screen credit for Jannina Poynter, shout-outs to the other cast members we’d like to give are for Carl Irwin who played Ron and Mary Bee who played “Old Lady” – a woman who sells bread door-to-door and looks like she would have been more at home on the set of Mama’s Family. Irwin went on to have a solid career as a character actor, while, like Poynter, this was the only credit for Mrs. Bee. Watch out for them, as they enliven the proceedings.

Interestingly, fellow “trash film” auteur Ray Dennis Steckler started the film, but Mikels completed it. You really can’t tell; their styles are very similar. That would also explain why the dirtbikers are called The Thrill Killers, after Steckler’s 1964 outing of the same name (maybe he had some promotional shirts lying around?)

The whole thing concludes with the end-credits song “Take Me Home” not by Phil Collins, but by T. Craig Keller, who also played Craig, one of the Preppers, and acted as an associate producer. In the end, Angel of Vengeance (AKA Warcat) is far from an action classic, but it features some blow ups, gun shootin’ and a handful of silly fights. For those out there that like their action off the beaten path and are willing to plumb the depths a little bit, you could do a heck of a lot worse. 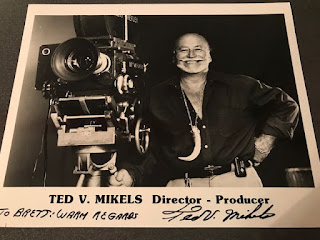