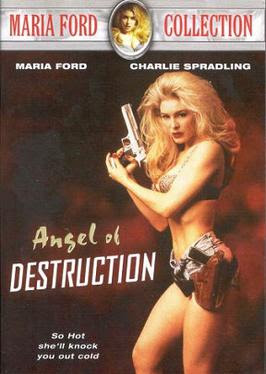 Delilah (Mark) and her sidekick Reena (Chanda) are the hottest act on the Hawaiian pop scene. They combine the female togetherness of T.a.T.u with the 80's-esque rock stylings of Pat Benatar. And they both perform live and in their music videos topless. Naturally this makes unhinged stalker/former mercenary Robert Kell (Broome) even more nutso. Not only does he kill prostitutes for sport while enacting a bizarre wedding ceremony with them, he also offs Brit Allwood (Spradling), a police officer tasked with protecting the duo.

When Brit's sister Jo (Ford) finds out what's going on, she's none too pleased. Not only does she take up Brit's former role of protecting the gals, she also goes on a one-woman rampage to find and stop Kell. After he kidnaps Reena, all bets are off. Jo then pulls out all the stops to save Reena and save the day. For Kell, will Jo be his ANGEL OF DESTRUCTION?

I want to live in a world where extremely attractive cops wear sleeveless half-shirts as their normal work attire. Even the female ones. Anyone who has ever seen any Roger Corman-produced action movies, from TNT Jackson (1974) to Firecracker (1981) to Silk (1986) to Angelfist (1993) to Black Belt (1992) and beyond will be very familiar with the formula used here, again, for Angel of Destruction. At this point it's basically comfort food. It adheres to the Corman-mandated 85-minute running time and meets or exceeds the nudity requirements. Most importantly, however, it's very entertaining. 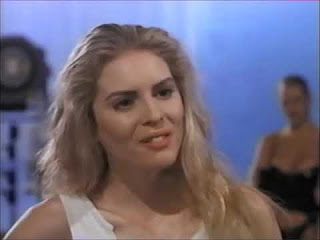 We could all use more Maria Ford in our lives and here is a chance to see her as the tough chick who gets results. She fights in the time-honored barfight, among other beat-em-up moments (including the classic almost-naked fight scene Corman has used before, but once you've struck gold there's no need to mess with the formula).

The first song performed by Delilah and Reena, which is either called "Are You Changed" or "Are You Chained" is a catchy one, and is a clever way for director Moore to improve upon the rather boring stripping scenes Corman insisted upon around this time. Yes, there is stripping during the song, but it's an original song and a live concert performance, not just a strip act (although Maria Ford as Jo, who does mention she was a former stripper, also strips in a later scene. Apparently even though she's now a highly-capable cop, the lure of the old ways is just too strong).

Jessica Mark as Delilah is a mystery. Despite her - dare I say - exquisite, model-esque beauty, this is her only credited acting role and she doesn't have a Wikipedia page. Her career could have been massive, but it seems she just dropped completely off the map. Chanda is less of a puzzle - she appeared in a decent amount of 90's erotic thrillers before disappearing herself (more than likely marriage and kids with a producer, but that's just a guess). Oddly, legendary adult actress Georgina Spelvin is credited as Foley Supervisor. And yes, it is the same Georgina Spelvin, even though her credit is spelled as Spellvin. Can anyone explain this? Just another mystery, evidently.

Because it was shot in the Philippines, some familiar faces are on display - Jim Moss, Nick Nicholson, and Henry Strzalkowski, among others, but Ford's love interest looks like John Stossel. Well, he has a mustache like Stossel. Angel of Destruction is as close as you'll get to seeing Stossel-Fu. For now.


Naturally, it all ends in a Final Warehouse Fight. This ticks off the final box required, so now we can officially say that Angel of Destruction delivers the goods. It's good old fashioned, Cinemax-style, brainless fun. There's bullets, beat-em-ups, and babes. It's a nice fantasy and it won't take up much of your time.

It's probably one of the last true exploitation pictures in the grindhouse style, and we applaud that to the utmost. Would that more movies had the guts to be this shamelessly entertaining and have such dedication to nudity.


With that, how could we not recommend Angel of Destruction? See it tonight!

Also check out write-ups from our buddies, The Video Vacuum and Fist Of B-List!
Posted by Ty at 10.6.20