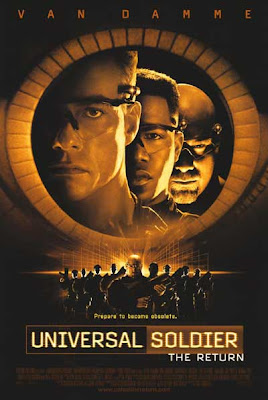 Luc Deveraux (Van Damme) returns, but the question is...why? This time around, Luc is just a regular Joe with a daughter, and he’s working with a Dr. Cotner (Berkeley) to refine and improve the Universal Soldier project. This is pretty surprising considering how he was treated by the higher-ups in the first movie. Nevertheless, At the base, everything is controlled by a 2001: A Space Odyssey-styled computer called SETH.

When the intelligent SETH determines that the government is going to pull his plug, he transfers himself into the body of Michael Jai White and goes hunting for Luc and his daughter. As if that wasn’t enough to contend with, Luc also must fend off fellow Unisol (a contraction of the words “Universal Soldier” for those that didn’t see the first movie) Romeo (Goldberg). Naturally there’s yet another do-nothing female reporter, Erin (Schanz). How will Deveraux get out of this one? 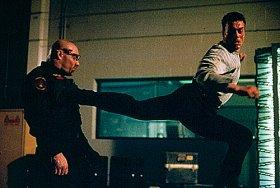 Sadly, this sequel to the highly entertaining original is a disappointment. It’s a big drop from the first one - it’s lifeless and not a crowd-pleaser. While it did receive a theatrical release, surprisingly, it has a chintzy Direct-To-Video look to it. It never inspires confidence when 95% of your movie takes place in one building. Yes, “The Return”, as we call it  (we refuse to dignify this crud with the Universal Soldier name) is one of THOSE.

Even from its silly opening sequence (which naturally involves rockin’ jetskis), and throughout its many scenes with terrible music behind them, this movie is trying to be hip and cool, but fails. A great example of this is the character of Squid (Hinkley) - a radically-awesome drinker of Mountain Dew who loves his Frankenberry cereal.

And speaking of characters that audiences can’t possibly connect with, the choice to cast fitness girl Kiana Tom instead of a proper actress is just odd. But the most glaring casting change involves the complete lack of Dolph Lundgren. Sure, we all love Goldberg, as much as anyone really can, but he’s no substitute for the Dolphster. Surely even Mr. Lundgren, who’s no stranger to DTV junk, read the script for this and headed for the hills. 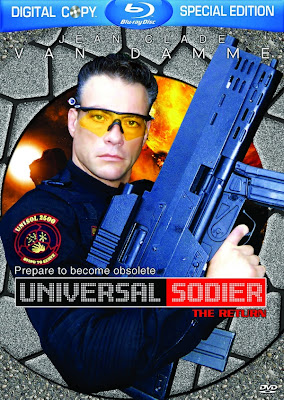 Not so for Van Damme, who looks tired and disinterested, even as he spouts his one-liners. Does anyone really want to see Luc Deveraux as just some normal dude - with a kid even? Surely a sign of this movie’s status as a pale reflection of its forebear is, instead of the robotic monocle the Unisols wear over an eye in the first film, now they just wear Blu-Blocker Bono sunglasses.

And while this movie is very dumb, and disjointed, and features some downright embarrassing steals from Demolition Man (1993) and Terminator 2 (1991), Michael Jai White ALMOST saves the movie. He puts in by far the best performance and seems dedicated to his role as the sinister SETH. But even despite his valiant efforts, he can’t overcome the cruddiness within. But on the bright side, a character rides Goldberg down a flight of stairs like a sled. Yes, you read that correctly. 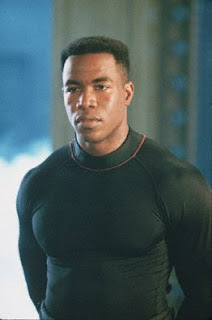 The bottom line is, this movie is an obvious cash-in and simply doesn’t need to exist. You might think, before watching this, “Yeah! It’s a Universal Soldier movie! Cool!” - it’s only natural to think that, but unfortunately, this movie doesn’t satisfy those expectations.

Yeah, this movie is pretty much an abomination but with the right amount of alcohol it might be good MST3K material.

Haha, so true! When my brother and I watched it with some other friends We were making fun of it the whole running time!

With you all the way on this one. It is a grade A stinker. An absolutely rotten piece of tripe.

I recently saw Universal Soldier: Regeneration which had the Dolph-ster and Van Damme, back in harness.

I thought it was a very decent effort. It also looked much better than many films either of these guys have been involved in in. No doubt due to director John Hyams getting his dad Peter Hyams in as the director of photography.

The Return is just straight-up awful. One of Van Damme's worst.

Regeneration was excellent. A review of that will be coming this week.

Cool, looking forward to the Regeneration review - thought that was way above average for a DTV flick.

Sorry to say this film was appalling. Nothing felt fresh about it. I mean killing SETH by freezing him and shattering him. Demolition Man did that 6 years before this film, were they just hoping we'd forget?

You're right Jai White does try and put in some effort but he didn't have the experience as an actor back then. He's vastly improved over the years.

Van Damme looks really bored throughout the film. And yeah, how the hell can he have a kid - he's essentially a zombie soldier!

Anyone sat through those TV movie sequels with Matt Battalgia? Not sure which is worse.

We hated that ripoff of Demolition Man too! It was embarrassing. Same with Van Damme having a kid. That doesn't make sense at all!

Also we haven't seen the Matt Battalgia Unisols yet, we will hopefully get around to watching them.

Totally agree about Michael Jai White. He was great in Blood and Bone and Black Dynamite. Did you see Never Back 2 yet?

Wow, guess i'm one of the few people who actually liked this film! LOL Yeah it's definitely inferior to the first film, but I still found it pretty damn entertaining, certainly moreso then crap like The Quest, In Hell and Legionaire.

I'm 100% with you on this one. Such a lame effort. Though I enjoyed Regeneration immensely. I loved seeing Van Damme and Dolph go at it and also loved the fast hand to hand style combat. Oddly that's something you don't see often in a Van Damme flick. Can't wait to get your review on that one. Regeneration certainly made me a fan of Hyams as an old school type of action filmmaker. Can't wait to see his next Van Damme effort soon.

Venom: Lol! There were some entertaining moments but it was the constant barrage of bad acting by Goldberg, "Squid", and the disinterest of Van Damme that made this pretty bad!

RobotGEEK: The Return was a very weak sequel. Hopefully Universal Soldier: A New Dimension will be as awesome as Regeneration!

The thing that puzzles me is the computer that wants to rule the world, ...for what effing reason would he want that? I am always amazed at the bad scripts that get realised..and the fights with overly loud metal playing to it? Holy crap!!!! More than just a missed opportunity, a real shame for all involved.

Oh right! The "metal music" was pretty awful. If they played real rock n' roll like The Scorpions or Judas Priest during actually well-made action sequences (like the 1st one), this could have been a real winner!

Instead it is a giant blot on Van Damme's career.

I actually liked the soundtrack myself, especially that Megadeth song "Crush Em"

Definitely agree about Crush'Em! That was a fun song.

Good review, I agree completely about the movie. It's pretty awful. Worth a glance only if you are compelled to see everything van Damme has done.

Just wanted to add, that blu ray cover is appalling.

Ed: It's true. The real star here is Michael Jai White. Van Damme is on autopilot this time around.

Jack: That giant so-called "gun" is not in the movie! Isn't the point of box art to entice someone to watch the movie? What about that picture did they think was appealing?

You'd be surprised how many DVD covers are inacurrate, the cover of Pitch Black had a similar mistake. Sometimes the summaries on the back are incorrect as well.

Hmm, that is interesting about the Pitch Black DVD. Will have to check that out.

Oh yeah, this one blows big time. It's funny because if you told me that JCVD and Michael Jai White were going to be in an action film today (how about a buddy cop comedy!) I'd be over the moon about the idea. Especially if there was a Seth reference in it.

Totally agree! They should make another action movie together!...but it should good this time.

I still need to see this one. Even if it is atrocious, I have a feeling some of my friends might enjoy it on a bad movie night.

It is perfect for bad movie night!