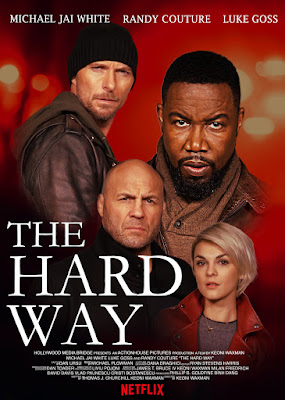 Payne (White) is just a humble bar owner in New York City who pays his bills, minds his business, and beats up gangsters that try to muscle in on his turf. When he gets word that his brother Cody (Campbell) was killed by baddies, Payne does the only sensible thing: he flies to Bucharest, Romania to get answers.

While there, he links up with Cody's crimefighting partner Mason (Goss). Complicating matters are the fact that there is a psychotic baddie named Joe Vig (Remes) who is torturing and murdering people, including some of Payne's and Mason's beloved girls at the local strip club. Now they're mad and want revenge. But Briggs (Couture) may have something to say about that. Will things be done the Payne/Mason way, or...you guessed it...THE HARD WAY?

Not to be confused with The Hard Way (1989) with Miles O'Keeffe, or The Hard Way (1991) with James Woods and Michael J. Fox, or any other movie called The Hard Way, this particular Hard Way puts fan favorite Michael Jai White in a situation that isn't ideal.

The opening fight scene between White and the gangsters is fun, but then the film becomes much more dour and serious than it needs to be. White goes to Romania (of course it's Romania) and then a lull ensues. A lot of stupid, inane dialogue and an unengaging plot, unfortunately, also ensues. 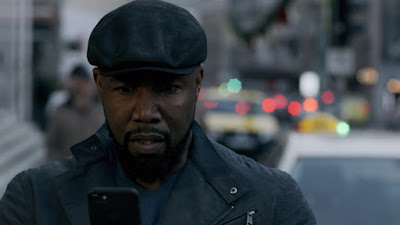 The Hard Way isn't great. It isn't eye-scratchingly awful either. It's just mediocre. It's watchable enough, we suppose, but you don't care about the characters as much as you should or could. There's nothing extraordinary going on here.

Of course, that doesn't dampen our fandom for Michael Jai White. He's by far the best thing here, but he can't overcome the deficiencies of plot and characterization. None of these weaknesses should come as a surprise from anyone who has seen anything else by director Waxman.

He's made a lot of latter-day DTV outings with Seagal. 'Nuff said. His smartest move this time around was replacing his usual muse Seagal with White. But he needed to go further and make something audiences might actually care about. Lazily leaning on cliches like a crutch isn't going to win you any new fans and converts. It's long past time for Waxman to think outside the box, if he's capable of doing so. 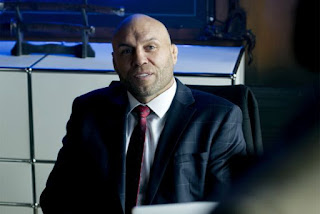 Goss is perfectly fine, if a bit bland, as the support. Toll Road himself, Couture, is here too. He has yet to set the acting world on fire (maybe because of his surprisingly high-pitched voice) like Dave Bautista, but maybe he's just not getting the right material.

Michael Jai White should be in another movie like Blood and Bone (2009) instead of undistinguished fare such as this. As The Hard Way is a Netflix Original Movie, they should have known that, and made something more catered to the fans, not to mention what White excels at.

So, The Hard Way is yet another middle-of-the-road modern-day DTV actioner. While it certainly had the potential to be something special, we didn't think it was anything to get excited about.

Comeuppance Review by: Brett and Ty
Also check out a write-up from our buddy, DTVC!
Posted by Ty at 2.11.20

This was another mediocre MJW project. I haven’t watched Welcome To Sudden Death yet, but I hope it will raise his profile.

We haven't seen that yet either, Blood and Bone is one of his best, he should do more movies like that.