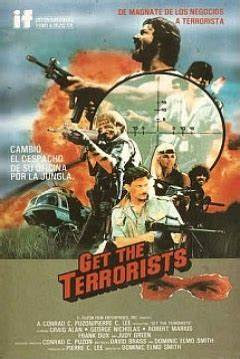 A man named Randolph "Bear" Maclaglen (Nicholas) is the evil head of a terrorist organization misleadingly called "People For Freedom". He comes from a family that produced rubber for the auto industry, but because they had rubber slave farms, a Senator Murdock (Davidson) investigated the Maclaglen clan and eventually put them out of business. Naturally, this drove Bear to take up an apprenticeship in commie villainy in Cuba, before getting into the baddie business himself.

So, that being the case, a team of professional badasses named Brock Towers (Dux), Strobe Walker (Alan), and Klaus (Marius) (perhaps Klaus felt inferior because his name isn't as awesome as the others) sets off to, you guessed it, GET THE TERRORISTS. They find a jungle-dwelling satellite badass named Pierre (Nicholson), and with the addition of a woman named Nikki (Green AKA Mrs. Richard Norton), the team fights their way through the jungles of Costa Verde until the ultimate showdown with Bear and his baddies occurs. Will our heroes GET THE TERRORISTS after all? Tune in to find out...

Get The Terrorists starts the way every movie - especially one called Get The Terrorists - should: with an up-tempo disco number called "We're Gonna Get You" by Ruth Vergara. Shortly before that, however, we're introduced to our bad guy, who - and you can listen and judge for yourself - says his name is "McLugly". At least that's what it sounds like, until we're informed it's actually Maclaglen. Then we get our initial power-team of heroes, beginning with the one and only American hero Frank Dux as Brock Towers. He looks a lot like Freddie Mercury here. As if one American hero wasn't enough, we get the great Craig Alan as Strobe Walker. And, even though he's the bad guy this time around, fan favorite George Nicholas is here too. 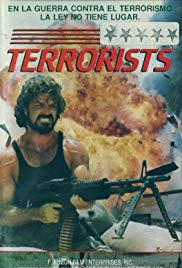 What all of that equals is this: almost too much American masculinity and machismo for one small screen to handle. Judy Green is present and accounted for as the token woman, and she's handy with a grenade, and mainstay of these sorts of things, Nick Nicholson is on board as well - it wouldn't be a Philippines blower-upper if he wasn't in the mix.

We get a classic barfight, plenty of jungle action and blow-ups, and lots of characters yelling at each other. It all slows down right before the climax, but when said climax arrives, it's a good one. The ending does indeed deliver the goods. It's really very explosive. Most cars featured in the film blow up at one time or another.

Interestingly, the on-screen title reads "Get The Terrorist" - no S. Also, the second of the catchy songs in the film, "Let's Move It" by Jane Crawford, was also used in the Dale "Apollo" Cook outings Raw Target (1995) and Triple Impact (1992). “We’re Gonna Get You” was also in Raw Target. The songs must have been huge hits in the Philippines.

Sadly, Get The Terrorists never received a U.S. VHS release. Only a small handful of countries were graced with the availability of this film. Now, thanks to YouTube (as of this writing) you can check it out without having to pay outrageous collectors prices. It's all certainly entertaining and features some great people that we know and love. If you're a fan of Philippines-shot blow-em-ups, you'll surely enjoy Get The Terrorists.

Comeuppance Review by: Brett and Ty
Posted by Ty at 1.7.21

Great review! I haven't seen this in a while. Pretty cool to see Frank Dux put up his dukes. Had to say it! This was a fun movie.

Indeed a fun one! I have the Japanese VHS and amazingly we have an Australian VHS, a spare sleeve I have stuck on my wall it's so manly!

Explosive Action: Haha! There's nothing wrong with being macho!