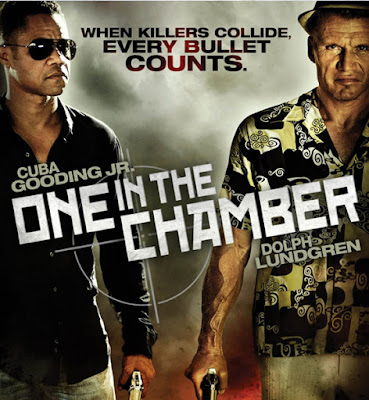 Ray Carver (Gooding Jr.) is an American living in Prague. He is known as "The Fixer" because he solves problems between rival gangs in the criminal underworld, usually by shooting lots of their members with a high-powered rifle. A relationship begins to develop between Ray and fellow American abroad Janice Knowles (Bassols), even though it appears as if he's stalking her. But could he have a valid reason for doing so?
Meanwhile, some of those dastardly baddie gang members have decided to bring in the big guns - literally - when they hire a rival "Fixer" nicknamed The Wolf, a Russian named Aleksey Andreev (Dolph). Now with not just rival gangs, but rival Fixers at odds, Prague (well, actually Romania for the most part) is going to become a battleground. Will the chances for victory come down to one simple thing...having ONE IN THE CHAMBER?

Remember how in Puncture Wounds (2014), when Dolph teamed up with Cung Le, we noted how much Cung Le looked like Cuba Gooding Jr.? Now, ironically, Dolph actually does team up with Cuba Gooding Jr. for One in the Chamber, a rather uninspiring run-through of stuff we've all seen before.

It's yet another bout of Russian gangsters, and we're frankly getting tired of them. While Dolph is by far the best part of OITC (which sounds like something Jerry Lewis might say, i.e., OITC! Nice Lay-dee!!) even he must be getting tired of playing Russian characters, as he did in The Killing Machine (2010) and, of course, The Russian Specialist (2005), which is arguably his best "Russian" role. 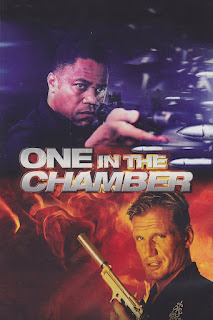 He's charming this time around (as he usually is), and he wears a lot of party-guy shirts and has a cool hat. He brings life to whatever scenes he's in, and that's desperately needed here. There are a couple of fights with Cuba Gooding, which was sort of a novelty to see, but does anyone really believe Cuba could win a fight with Dolph?

That aside, with Cuba Gooding not appearing in any movies of late because of his legal woes, maybe it's finally time now that Omar Gooding could step out of the shadows and into the breach left by Cuba. Idea for a potential tagline: "He's not a wild and crazy kid...anymore." Perhaps he could star with Donnie (now Don) Jeffcoat and they could be cops that go around busting heads. If any production companies out there like the idea, give us a call. We're available to write the script.

Anyway, we get some dudes yelling while shooting their guns, and holding their guns sideways "gangsta" style. On the other hand, when Cuba is shooting his rifle out the window, we get some unnecessary, video-game-esque "bullet time" effects. Not only did Sniper (1993) do it better, Dolph himself was better at shooting a rifle out a window in Silent Trigger (1996). That whole scene just served to remind us all we're in low-budget-DTV-shot-in-Romania land here. It did the movie no favors.

But here's the bottom line about OITC: There's no emotion here at all. It's very hard to care about the characters, because it's all very one-dimensional. We really wanted to care about Cuba and Dolph and all, but the movie made it hard to do that because there was nothing to chew on story-wise. Russian gangsters shooting each other is all well and good, but with no backstory or emotion underpinning it all, it starts to get dour and repetitive after a while. That's why Dolph's character is so important to the film. Without him, we'd be in serious trouble here.

You may have noticed that an actor named Billy Murray is in the film as well. Just to clear up any confusion, this is a different man than Bill Murray. No, Bill Murray didn't slightly change his name so he could appear in a DTV action film with Dolph Lundgren. Though that would have been awesome, and, somehow in character with Bill Murray's personality. But we did want to sort that out. Murray probably gives the second-best performance in the film.
Additionally, we believe there's a Mandylor lurking around in there somewhere as well. Maybe, as we did, you can play "spot the Mandylor".


Despite the impressive presence of the great and mighty Dolph, One in the Chamber overall is, sadly, typical of the modern-day DTV scene and doesn't have a lot going for it other than him. We hate to say it, but that one in the chamber does not fire on all cylinders.
Comeuppance Review by: Brett and Ty
Posted by Ty at 8.7.21