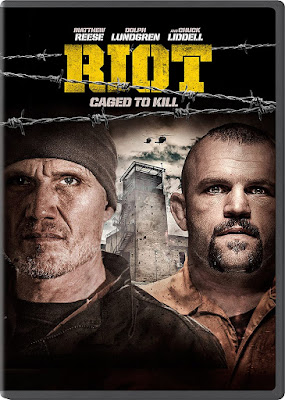 Jack Stone (Reese) – not to be confused with Hack Stone – was a Cop On The Edge, but now he’s a cop in prison. He put himself there so he could get revenge. Super-evil baddie Balam (Liddell) runs the prison with an iron fist from his own plush, private area.

Many inmates are his underlings that do his bidding, so when Jack Stone first arrives on the inside, he’s going to have to fight his way all the way to the top – to Balam, the Russian Gangster who ruined his life by committing some vile acts. However, it’s not all hopeless; Jack Stone finds some friends along the way, most notably William (Dolph), the kindly janitor. But what is William’s secret? Also Alena Childs (Ryan) is on the case along with the good guys. Our three heroes have to fight not just Balam and his goons, but they also have to fight city hall. Corrupt politicians and wardens are on both the take and the make. Naturally it all ends in a classic prison RIOT…

Riot – not to be confused with the classic Gary Daniels Riot – is a decent enough example of a latter-day DTV prison action outing. It’s very clearly influenced by Death Warrant (1990) and Bloodfist 3 (1992), among other examples you could possibly name. As for our main hero, Matthew Reese, he’s in the grand tradition of Joe Flanagan and Dean Ambrose.

One of the better aspects of Riot is, unsurprisingly, Dolph Lundgren. Perhaps sensing that Matthew Reese couldn't carry the entire film on his shoulders, producers brought in the almighty Dolph. (To be fair, we don't know for a fact that that's what happened, but it's as likely a scenario as any). Dolph puts in a genuinely excellent performance, and even gets to stretch a little as an actor. Casual fans might not believe it, but casual fans won't be watching Riot anyway. 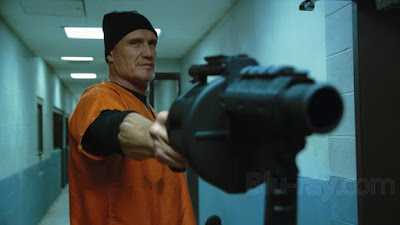 There are plenty of prison fights, including a handful on the female side of the prison (we assume the male and female prisons are on opposite sides of the same building?) - and we believe Danielle C. Ryan can have a bright future in DTV action if she wants one.

While the stunts and brawls are more than competently executed, in the editing they did that annoying thing where they take out frames of film during the fight, presumably to increase the speed and the impact level. Consequently, it has a bit of a herky-jerky look that they're not even trying to hide. Modern-day DTV filmmakers seem to think that it's just a matter of course to do things this way these days, and we're all supposed to accept it. Well, we don't like that very much. We say let the fights speak for themselves, with no trickery.

In classic fashion, people are after the information that's on "the discs", but because we're now in 2015, they also want what's on "the thumb drives". Similarly, Riot adheres to what we've seen before in the realm of the prison movie. The problem with that is there is only so much you can do in that setting, and it starts to get a bit repetitive after a while. But, naturally, it all comes to a head in the time-honored prison riot, which is done quite well.

In the end, Riot delivers exactly what you would expect - and what you would want - in a beat-em-up prison movie. It doesn't undercut your expectations, nor does it exceed them.

This was one of the better action movies of the previous decade. I hope we will see Matthew Reese in the future again, since he can clearly carry the fight scenes.

It will be interesting to see what he does in the future. Thanks for commenting, Roger!