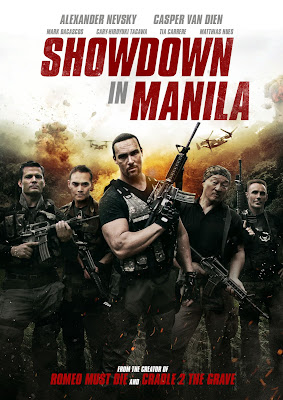 
Nick Peyton (Nevsky) and Charlie Benz (Van Dien) are buddies and private detectives, but they seem more like mercenaries. After her beloved husband, Matthew Wells (Dacascos), is slaughtered by some baddies, including Dorn (Hues), a certain Mrs. Wells (Carrere) pays a visit to Nick and Charlie. She wants both answers and revenge, so she goes with the best. It turns out the super-evil Aldric Cole (Tagawa) is behind all the chaos. One of the smarter moves made by Peyton and Benz includes calling in some most excellent reinforcements: Haines (Rothrock), Dillon (The Dragon), and Ford (Gruner). What will happen after the SHOWDOWN IN MANILA?

Showdown In Manila was a pleasant surprise. As it is the long-awaited directorial debut of Mark Dacascos, we knew he wouldn’t let us down, and he didn’t. The man knows too much about what works and what doesn’t work in the world of action movies to really produce a dud. As it was produced, in part, by Dacascos, Nevsky, and Andrzej Bartkowiak, and features a lot of the same cast members, this could have been another Maximum Impact (2017). Thankfully, it isn’t. It’s a lot better. It’s snappier, shorter, and the humor works a lot more. It mercifully doesn’t include Tom Arnold making references to his bladder.

Even the setting of the Philippines is a nod to the golden age of action in the 70’s and 80’s, as is the title, which is reminiscent of Showdown In Little Tokyo (1991), Showdown (1993), or pretty much any action movie in the past where people were having some sort of showdown. It seemed to happen a lot back then.

Clearly, the standout aspect of ‘Manila is its stellar cast. For our two main heroes, we have the power team we’ve all been waiting to see together – Nevsky and Van Dien. Both are likable and they make a great duo. For some reason Nevsky seems to get a lot of “shade” online but we think he’s a solid action presence and has a Schwarzenegger-esque sense of humor. He doesn’t seem to take himself too seriously, but he can still give the baddies a quality pounding. Nevsky should have been around in the 80’s, but now that he’s in our era, he can act as a sort of “throwback” action star of the type we’re more used to. 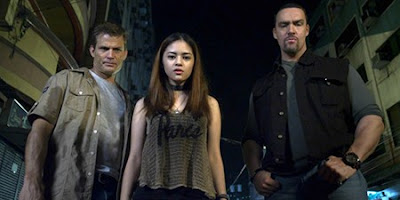 Matthias Hues feels like an old friend at this point, and Tagawa always – ALWAYS – plays the baddie. He must have that kind of face. Carrere isn’t hunting relics anymore and it was nice to see her (and she was, of course, in the aforementioned Showdown In Little Tokyo, as was Tagawa). Things pick up when our heroes meet up with the reinforcements in the jungle. Seeing fan favorites Rothrock, The Dragon, and Gruner shooting and fighting people in the jungle really brought us back. It’s a direct reference to the 80’s and early 90’s. There just should have been less (or, ideally, no) CGI or questionable muzzle flashes. But that’s a minor quibble when we see our favorite stars back in action. Literally.

The three reinforcements should have had more screen time, but we’re happy with what we have. While they’re all wearing camo in the jungle, including Rothrock, her bright pink hair streaks kind of defeat that purpose…but it’s all part of the fun. The movie is filled with silly shootouts and amusing humor. It would’ve gone to theaters in the 80’s for sure.

Featuring the T.a.T.u-esque theme song, “Another Life” by Polina Butorina (who was in both this and Maximum Impact and sings both theme tunes), Showdown In Manila is about as close as we’re going to come these days to golden era-style action, and we applaud Nevsky, Dacascos, and the gang for that. We say keep ‘em coming.

Comeuppance Review by: Brett and Ty
Also check out a write-up from our buddy, DTVC!
Posted by Ty at 9.11.20