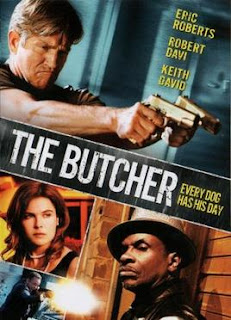 Merle "The Butcher" Hench is one cool dude. He's an ex-boxer, has a pair of golden guns, and he drives a 1969 Dodge Charger. His temperament is very even and he doesn't yell. He also has a gambling problem. As an enforcer for Irish mobster Murdoch (Davi), he is highly skilled in "the science of violence", as someone tells him. However, Merle's luck begins to change when he wins money from both Chinatown Pete (Woodbine), and Larry Cobb (David).

Meanwhile, thinking that Merle is "over the hill", he is set up as the patsy for a multi-million-dollar heist on a group of other gangsters. While Hench does end up with some of the money, and plans to use it to run off into the sunset with diner waitress Jackie (Bjorklund), he can't help but shake the fact that he needs to get revenge for the fact that Murdoch and his boys betrayed his long-time loyalty to them. So, risking it all - including a potentially brighter future with Jackie - The Butcher gambles one last time...for his life.

There's a lot to recommend about The Butcher. The style of it is fairly downbeat and a bit unorthodox, with some interesting flashbacks. It seems influenced by the "L.A. Noir" of the past. It's a fantastic showcase for fan favorite Eric Roberts as well, as he not only gets to ponder on the existential side of things, he also does some Eric Roberts-Fu on the baddies, and he shoots a whole heck of a lot of them as well. 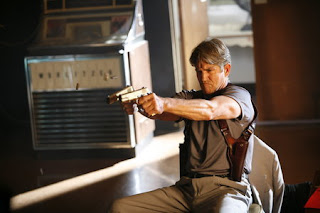 Director Johnson is almost venerable towards Roberts and gives him the starring role he deserves. There are a lot of other interesting character moments as well - Davi doing an Irish accent, instead of the expected Italian one, was a surprise treat. Woodbine and David as The Butcher's gambling cronies added a lot. The great Geoffrey Lewis as Naylor, the pawnshop owner, stood out. Although he only appears in the silent flashbacks, Vernon G. Wells is hiding in there as well. And this has to be one of the best-ever performances in Jerry Trimble's career.

The cast is strong and the main idea behind the film is simple but effective. We've seen a good amount of Johnson's films at this point, and he really seems to understand action and what the fans want. He's one of the very few directors out there that really seem completely dedicated to the action genre.

While The Butcher is far from a thrill a minute - it's deliberately paced and takes time to build up a head of steam - Johnson seems to be showing the fact that you can combine action violence and quasi-film noir without a hitch. When the action does come, it's explosive. It's all the more impactful because of the character moments that surround it. Johnson does his best to eschew cardboard characterizations. 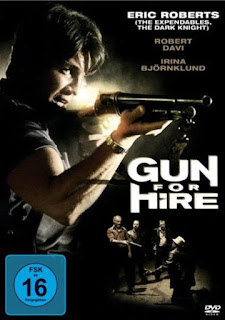 We applaud everything about the film, with the exception of one little caveat. It's too long. At almost two full hours, we couldn't help but think that if it was trimmed down to 90 minutes or so, it could have worked better. Yes, we realize we just contradicted ourselves a bit - it takes time to build up character moments, so how can we say we love those moments and then want to cut them - but surely a few trims here and there just to get things down to a reasonable running time couldn't hurt.

Perhaps interestingly, the working title for the Van Damme film 6 Bullets (2012) was The Butcher. They must have realized that this The Butcher predated it, then they changed it. Then they got Joe Flanigan. As all movies should.

The Butcher is a solid film all around with a lot of good points and highlights. Its mix of thoughtfulness in with the violence was appreciated. There are interesting faces, as well as ideas, and the cast is excellent. The only thorn in the movie's side is that it's too long. So, as that's not a complete dealbreaker, we say check it out.

This review made me order the film! Craving something like this.

Thanks! We appreciate that. You'll definitely enjoy it!