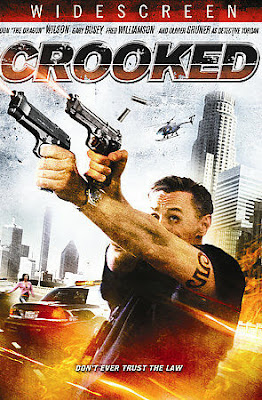 When a hooker with a heart of gold named Angel (Kauffman) witnesses a murder, police officers Danny Tyler (The Dragon) and Phil Yordan (Gruner) are put in charge of looking after her so there isn't any gangland retribution before she can testify. Of course, this isn't as simple as it seems, as a perfect storm of police corruption and irate mobsters coalesce around our three heroes. While they're on the run, shootouts and fights ensue. Where do Rouse (Busey) and Jake Lawlor (Kove) stand in all this? And who amongst all of them is CROOKED?

Lone Tiger Effect strikes again with Crooked, a chintzy affair that makes Detonator (2003) look classy. You'd think you couldn't go wrong with Don The Dragon, Fred Williamson, Kove, Busey, and Gruner all together. Well, unfortunately, it appears you can. Fred and Kove have glorified cameos, so you can take them pretty much out of the equation. The material the others had to work with wasn't the best. Low budgets have never been a negative for us, but if that's the case you've got to try just a little bit harder. 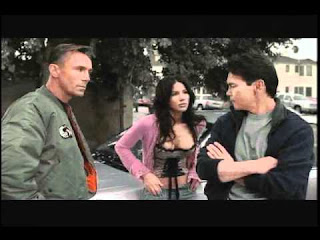 The pacing is off, the dialogue is insipid, and the whole thing has that "stupid" feel. You probably know what we're talking about. Then there are the technical issues, such as poor lighting and sound, which add to the mess. However, maybe it's best that some of the dialogue isn't heard. That can only help the situation. That being said, sometimes it provides some laffs, as there's a scene early on in a police squad room where everyone's voice sounds normal except for Gary Busey's, which sounds like it was recorded separately in a large, echoey warehouse. We wouldn't normally mention it, but it's very, very obvious. And humorous. 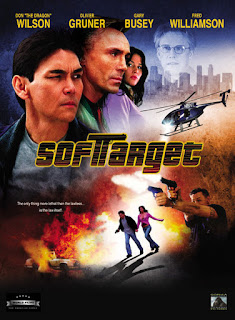 In the scenes where Busey is talking and it sounds like his voice was recorded in the same county, it certainly appears like they let him run wild with his own dialogue. There are a few instances of classic "Buseyisms" on display that only he could come up with. Besides that, Don's lovable woodenness is not only present and accounted for, it almost powers the movie along. Gruner's name in the film, Phil Yordan, must be a nod to the classic Hollywood-era screenwriter. But what would the original Yordan make of what he saw here? While Gruner is obviously trying, Don and Busey come out best in all this.


Yes, there is an exploding helicopter and a (weak) barfight...but we couldn't help but think that if Crooked was a PM movie that came out in 1996, it would have been done right. So why, in 2006, should things be any different? Just learn from the greats of the past. You'd think director Camacho, who worked on so many of those classic 90's productions as a stuntman, would know better. I mean, yes, Point Doom (2000) had Sebastian Bach, and Gangland (2001) had Mario Van Obama, but what does Crooked have? It appears, sadly, that the answer is diminishing returns.


Crooked is, at best - at best - a one-time watch. And that's being generous. We're glad our favorite stars are working, and we like to see them, even in a lesser production like this. But we couldn't help but be disappointed.

Comeuppance Review by: Brett and Ty
Also check out a write-up from our buddy, DTVC!
Posted by Ty at 15.3.21