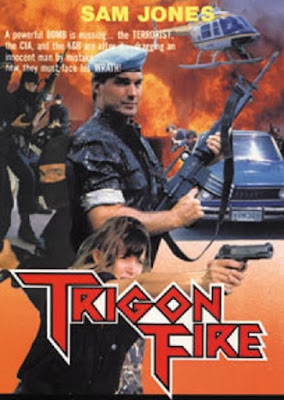 
The Trigon is a superweapon developed by several world powers and it has the capability of massive destruction. It's in three (hence the "tri") parts, and all three parts are needed for it to work, so everyone is after those parts, which are collectively called The Trigon Factor. After Abdul Hassik (Eddie Jadali) of the Palestinian Liberation Front steals part of the Trigon, he then sells it to international terrorist Cyrian McCoy (East).

CIA operative William Shield (Light) is tasked with taking down McCoy and his goons. Unfortunately, an American doctor, James Ford (Jones), is swept up in all this intrigue thanks to a classic case of mistaken identity. As are his wife and daughter. Teaming up with a man named Manuel (Beyer), the two men fight the baddies the best they can, but it's not going to be easy with something as big as the Trigon at stake. What will happen to Dr. James Ford?

You know that any movie featuring the credit "And Introducing Blueberry as Sandra Powers" is going to be one that's sure to pique the public's curiosity. However, Trigon Fire is more in the mid-range of Teddy Page's directorial output. It's certainly not bad, but it doesn't reach the heights of a Phantom Soldiers (1989). To be fair, what can? There seems to be more of an emphasis on intrigue this time around. The exploding huts take a secondary role to that. Maybe this is Mr. Page's more "mature" work. 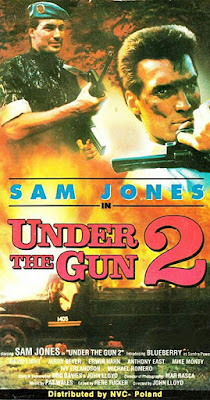 If you watch a lot of these Philippines-set actioners, you'll recognize plenty of the hallmarks of the genre: machine-gun shooting, green backdrops, loud, screaming dialogue, and the presence of such people as Mike Monty. While Monty is your classic evil general, giving the outing an "El Presidente"-type vibe, we see that Manuel is more than just your average cabbie.

David Light has an impressive resume that consists of almost exclusively appearing in Philippine action. He looks like the guy from Sparks, so of course he was cast in the action hero role. A movie highlight appears when he comes to face off against the baddies on his motorcycle. He's wearing a leather outfit with huge aviator sunglasses and the shot is from below, so he looks extra-heroic.


While we've seen plenty of guard-tower falls in our time, we have yet to see someone tumble slowly down the steps of said guard tower. Well, until now, of course. It's less of a violent spectacle, more of a slow-motion "oops!"

Fan favorite Sam Jones seems to be hilariously miscast as a confused doctor. That's one of the things that makes the film so fun overall. Sure, he gets in on the action, but it appears a decision was made to make David Light the main action hero. Maybe Jones was put here just so they could market the film as Under the Gun 2. Of course it has nothing to do with the original...was the first Under the Gun such a huge hit in The Philippines that that title was warranted? It appears the answer was yes.

If you watch the end credits, you might be surprised to find that these people were involved: Kurt Russell, Spike Lee, Wallace Shawn, John Hurt, Christopher Hitchens, Harvey Fierstein, and Don King, as well as theater luminaries Neil Simon, Sam Shepard, Joe Orton, Peter Shaffer, Arthur Miller, and, most hilariously of all, Stephen Sondheim!

It was very generous of these people to lend their time to Teddy Page. Clearly they recognized the artistic merit of Trigon Fire. I've heard of "off Broadway" but this is ridiculous! I heard yet another alternate title for the film was going to be "Trigon Fierstein".

There's always something wacky going on in the exploding-hut genre and this just proves why they're continually worth seeking out.

While it wasn't released in the U.S. or U.K., Trigon Fire may be worth seeking out for completists of this sort of thing. It doesn't rank towards the top of the heap, but certainly a viewing on YouTube will provide 85 minutes of entertainment.

Comeuppance Review by: Brett and Ty
Posted by Ty at 7.5.21

One of the lesser movies of the great Teddy Page. Still fun, though.

We pretty much agree, Roger. But we have to watch any Teddy Page we can get our hands on.