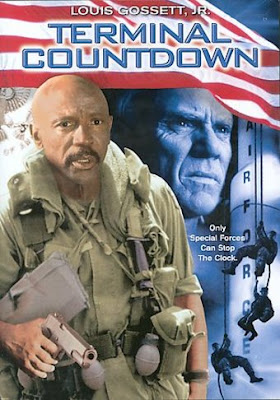 When it's discovered that Y2k will trigger a mechanism that will set off some missiles hidden in the Colombian jungle, a team is sent to prevent that from happening. General Seward (McDowell) sends computer techie Vince (Woolvett), Morgan (Gossett Jr.), who comes out of retirement for the job, and CIA head Fairchild (O'Ross) to investigate. (Morgan and Fairchild? Could that be just a coincidence?) While there, they meet the mysterious Russian agent Soljev (Chalke). Of course, they all have to face lots of pitfalls and problems, not the least of which is your prerequisite Colombian druglord and his goons. Just what any of that has to do with Y2k is anybody's guess. Can anybody stop the TERMINAL COUNTDOWN?

OMG! It's Y2k! Such was the nature of that threat, PM snapped into action with this film, originally titled simply Y2k, as did NBC, who gave us Y2k: The Movie (1999). Check out the commercial for that one on YouTube. It's pretty great. After getting off to a bang-up start, Terminal Countdown settles into terminal boredom after the movie relocates to the jungle. Not to get too technical, but it's really a forest. It really loses the plot - literally - after the drug dealers show up, but, then again, most of the scenes featuring Paco (Lauchu) really liven things up. He pulls large machetes out of nowhere and slaughters people with them. He provides much-needed interest in this largely-sloggy outing.

Not very surprisingly, all the scenes with Malcolm McDowell are gold. It's very amusing to watch him get mad about Y2k. Much like Dragonfight (1990), Terminal Countdown is one of those movies where (some of the) dialogue scenes are more entertaining than the action. During the many forest slog moments, they should have cut back to McDowell doing or saying something. That would have helped a lot to perk things up.

While this is a PM film, it feels more like Nu-Image. For example, many of the forest scenes are "borrowed" from Predator (1987). There are quite a few moments when our characters are looking at nothing or shooting at nothing - well, except Predator footage. Same with the car chase at the beginning, which was taken wholesale from Basic Instinct (1992). Yes, Basic Instinct had a car chase. And it's also in Terminal Countdown.

Now, try as Louis Gossett, Jr. might, it's hard to help a movie about silos. Not terrorists, mind you, but silos. There is a lot of talk about silos in the film. Evil, evil silos.
But, beyond that, there's a bigger problem. A much bigger problem. That, of course, is Jaimz Woolvett's hair in the movie. It's atrocious. Remember Michael Berryman’s hair from the Motley Crue video for “Smokin’ in the Boys Room”? This gives it a serious run for its money. It almost single-handedly (single-hairedly?) ruins the film. Imagine, if you will, a messier Moe Howard bowl-cut, but the owner of said bowl cut said to their barber, "just shave the lower third of my head so it looks like I'm wearing a rug at all times". We get that his character, Vince, is supposed to be a dork. We also get that it came out in 1999. But still, there's no excuse for that particular haircut. You've heard of fashion don'ts? Well, this is a hair don't. Call it a cautionary tale. Even more so than the nuclear war implied in the film. 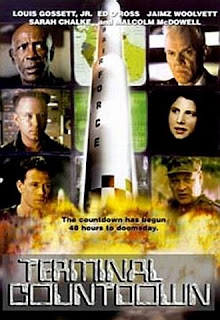 Also, we've got another problem. The 100-minute running time. What the heck were they thinking? Why the frack is some PM movie about people running around a forest trying to stop Y2k 100 minutes long? Can anyone answer this? If they just removed the Predator and Basic Instinct footage it could have been around 90 minutes. But, no, they couldn't do that.

There are enough cool and funny moments to sustain an 80 minute movie here. There really are. But 100? That's pushing it. Just the 90's computers, CD-ROM screens, Paco, and even the egregious green screen moments - plus Malcolm McDowell, of course - are sufficient to entertain an audience for a limited amount of time. But Pepin overstayed his welcome, which is unfortunate.

Y2k Productions, the production company for this film, should have produced more movies. They should have flooded the market with more Y2k movies than we could handle. If nothing else, Terminal Countdown - besides being yet another "Terminal" movie for us - is a nostalgic look back on a hyped-up threat that was slated to kill us all on January 1st, 2000. That was an idea exploitable enough for a company like PM to work with. But Pepin should have stuck with the vibe going in the first 20 minutes of the movie. Then we'd have something. As it stands, we can only really recommend this film to die-hard Y2k buffs. If you're out there, let us know.
Comeuppance Review by: Brett and Ty
Posted by Ty at 14.5.21

Due to the state of VHS in 1999, PM Entertainment was in such dire straits that it had to rely on stock footage, producing mediocre or simply bad movies. Speaking of the Y2K bug, couldn’t someone have sent a team to stop the Y2K19 bug?

If PM was around today, they would have made a movie about the 2019 Y2K and it would star Lorenzo Lamas and Richard Greico. Haha