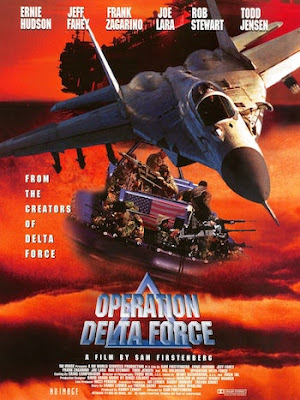 When some evil terrorist baddies led by Johan Nash (Lara) break into a South African research facility and steal vials of both an ebola-like virus and the "anti-serum", there's only one thing to do. Call the Delta Force, of course. Soon, Captain Lang (Fahey), McKinney (Zagarino), Junger (Sutherland), and Maj. Tipton (Hudson) are unleashed to take down Nash and his underlings. Admiral Henshaw (Holbrook) is at the command center to keep an eye on the situation.

Although the typical Washington empty suits are bickering about what to do, the Delta Force continues on with their mission - until a development occurs that threatens the whole thing. Will OPERATION DELTA FORCE succeed, or will Johan Nash's evil ponytail rule us all? Dare you find out...?


We don't know how or why, but Nu Image continually - almost stubbornly - keeps churning out these run-of-the-mill actioners. It all feels like we've been here countless times before (maybe because we've seen that same train footage in so many other Nu Image movies) but nothing stands out during Operation Delta Force. It's the same-old same-old.


While there is plenty of gun-shooting and good-quality explosions, and it's shot well, somehow a certain spark is missing. A certain je ne sais quoi, if you will. A grounded helicopter blows up, and Joe Lara gets to show off his Afrikaans accent, but somehow that's not enough. 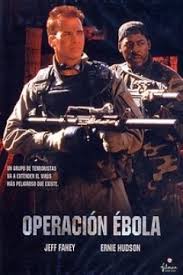 It does feature some fan favorites, such as Jeff Fahey, Ernie Hudson, Frank Zagarino, and the perpetually-elderly Hal Holbrook. Hudson tries valiantly to inject some sort of energy and presence, but it's tough going. Holbrook is trapped in a Joe-Estevez-in-Money-To-Burn situation where he just looks at screens the whole time. He does tout the new technology of "VidLink", which evidently was like the 1997 version of Skype.


One of the more noteworthy subplots involved Zagarino's character, who, apparently, is a misogynist and doesn't approve of Junger being there because she's a woman. It didn't really go anywhere, but it should have, perhaps in a fight between the two. Interestingly, One of Natasha Sutherland's only other credits was in the Joe Lara TV series Tarzan: The Epic Adventures.


At almost-random intervals, it looks like some older stock footage of planes and such is trotted out. It doesn't even come close to matching the newly-shot stuff for the movie at hand. It seems like at any moment, a graphic is going to come on screen that says: "America's Navy: Join Today!" It didn't exactly liven things up, but it shows we were paying attention.


There are many, many similar films out there that are just like Operation Delta Force. Unfortunately, this is just another one. It's not badly made, but it doesn't engage the audience and there's nothing different, special, unique, or weird about it. It's just sort of there.


It seems like the sort of thing that Cinemax or one of the other pay channels would have shown in the 90's just to fill a bit of airtime, perhaps in the afternoon. Director Firstenberg has done some awesome movies in the past, but let's face it: this is no Breakin' 2: Electric Boogaloo.

Also check out write-ups from our buddies, Cool Target and The Video Vacuum!
Posted by Ty at 8.9.20