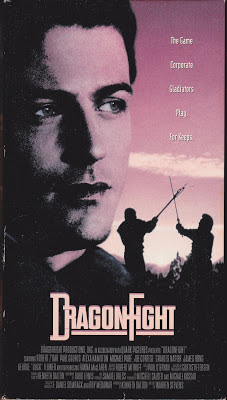 Directed by: Warren A. Stevens

In the deserts of Arizona, two men face off in a battle to the death: the maniacal Lochaber (Z’Dar) and the honorable Falchion (Coufos). Because this is the future, the two men are being controlled by their corporate masters. One big corporation, led by the smarmy, ponytail-wearing businessman Michael Moorpark (Paré) and his associates Asawa (Hong) and the creatively-named Kyoto (Aleong), have millions of dollars riding on the success of their chosen fighter. The other businessmen, led by Baybington (Cortese) are their rivals, backing their own guy. They sit in their cushy offices watching the proceedings play out on TV monitors. Falchion decides he’s had enough and defects. He goes on the run, refusing to fight. It’s on his travels away from Lochaber that he meets a desert Ranger, Moochow (Napier) (who presumably, based on his name, will get a Chicago-based talk radio show) and a drunken stranger, Jericho (Flower), who decides to narrate the whole story. There’s also the magical hot chick, Dark Servant (MacLaren), who has the power to heal. But the time comes when all men must fight, and Falchion realizes he must face off against the murderous Lochaber (who has gone rogue and started killing innocent civilians). Who will be victorious in this so-called “Dragonfight”?

Oh dear. Dragonfight is one choppy, nonsensical mess of a movie. It’s more an off-kilter mishmash of stupidity and half-baked concepts than a fully-fleshed out film. We were happy to see a top-billed Robert Z’Dar, and a second-billed Paul Coufos, especially on a tape released by a major label (Warner Brothers, though we don’t understand why; this definitely seems like something that would come out on a much smaller label - but then again, we’re happy some of our fan-favorite actors got wider distribution than normal, even if it’s not an ideal vehicle for them). Paul Coufos, star of Busted Up (1986), strongly resembles Huey Lewis - we suppose this is as close as we’ll get to seeing Lewis in an “action” film, though Falchion needed more goons to fight, not just one, and he spends most of the movie running from the fight. That’s bad policy for a supposed action movie with the word “fight” somewhere in the title. 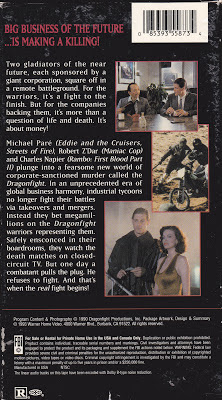 Michael Pare has a very limited amount of screen time, and of that, his ponytail steals his performance away from him. The movie as a whole has some classic line readings, some of which are said by James Hong, but just about every character says a stupid and/or confusingly-written piece of dialogue in an appropriately-confused manner. That’s why the first 30 minutes or so of Dragonfight is so wacky and funny. But the desert sequences are mostly slogs and have an unfortunate Albert Pyun feel, and things slow down tremendously then. Some nice cinematography can’t fix the egregious problems this movie has.

Z’Dar runs around the desert yelling “RAAAAAHHH!!!!” and wearing a too-small suit of chainmail, complete with codpiece. Charles Napier has a cap with the word “Ranger” on it in tiny type, so small you can barely read it. Were smaller-than-average chainmail suits and “Ranger” embroidered patches cheaper than normal-sized ones?  Then George “Buck” Flower (or is it Randall “Tex” Cobb? Not really sure...) shows up, and most of his dialogue (and inexplicable narration) is so grumbly, mumbly, and slurred, he makes William Smith seem like a master of elocution. And lest we forget Tom Magee as Bull, the token meathead. Naturally a movie about mystical sorcery wouldn’t be complete without the Canadian 1982 World Powerlifiting Champion. Also he was in Stone Cold (1991) and Street Knight (1993). 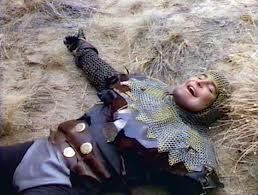 Director Warren Stevens also is responsible for Lone Tiger (1999) - how does he keep assembling impressive B-movie casts for these nonsensical movies? Sure, the writing, editing, and directing are very off, but our question is: did Stevens think it made sense? Did he think it would make sense to audiences? Or does he know it makes no sense, and he doesn’t care? These are the questions we’re curious about. But naturally, there is a lot of repetition to pad out the running time. We also noted that the movie Digital Man (1995) is very similar to this. Of all the movies to imitate, why Dragonfight? Is it really that inspirational? Add in a little Cyber Vengeance (1997) and you have...well, something.

The first half-hour is fairly mind-boggling, but then the silliness subsides for most of the rest of the film. We felt the corporate-based scenes were more interesting than the desert slog scenes, of course. So that led to an overall feeling of dissatisfaction. Featuring the song “Take My Stand” by Velvet Hammer, Dragonfight is, despite author John Stanley giving it a glowingly positive review in his book Creature Features, a confusing disappointment after its opening promise. But there are some unintentional laughs along the way.

Also check out a review by our buddy, The Video Vacuum!

Thanks for the plug.

I agree, this one sure was a dog. At least Z'Dar was more or less hilarious.

No Problem. Z'Dar was funny, but he just couldn't save it.