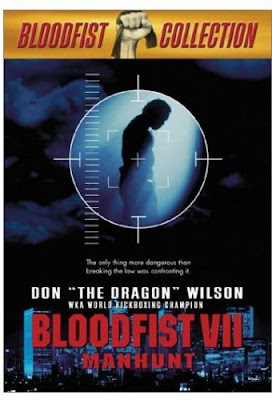 Jim Trudell (Don) is a mysterious drifter who wanders into a local biker bar. After being harassed by the clientele, naturally a barfight ensues and Stephanie Williams (McWhirter) is impressed. She leaves with Jim and they get a hotel room for the night. When he wakes up, she's gone, as is his car. Surely frustrated as all get-out, he goes to L.A. to try to track her down, but soon gets accidentally embroiled in the nefarious schemes of the baddies. With Captain Doyle (Williams) hot on Jim's trail, along with certain other less-savory members of the force, Jim has to summon all of his "particular set of skills" to survive on the streets until he can clear his name. With the police, the FBI, and gangs of toughs all out for Trudell's blood, will he ever survive the MANHUNT?

So, Don is on the run and it's nothing at all like The Fugitive (1993). No similarities whatsoever. Never mind that it was a recent box-office hit and that the Corman factory made it their business to do low-budget versions of big Hollywood blockbusters. What we all need to realize is that Don is his own man. In this case, he's being hunted. Hence, Manhunt. 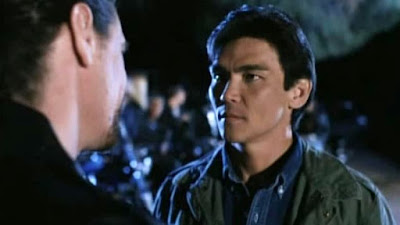 Like most of the later Bloodfist sequels, this is really its own movie and not connected to any of the others. It was also released as simply Manhunt, which makes more sense as there's no underground fighting that the Bloodfist appellation would indicate. When the fights do occur, they're a lot of fun to watch, but they're more few and far between than you might think. The scene in the park is a standout, with Don shooting guys with wildly colorful shirts with a machine gun. There should have been more scenes like this one.

But it's not all punching and roundhouse kicks to the head. There's a serious message here as well. For a while, Trudell has to hide out in a dumpster. Apparently he's there for a long period of time, until the guy taking out the trash shoos him away, calling him a drug addict. It really shows the plight of our nation's homeless. Then more face-kicking swiftly ensues.

Steven Williams plays Captain Fuller -- sorry, Captain Doyle, and he's a much better than average BYC. For one thing, he's not trapped behind his desk like most of the others are. He's out on the street in the manhunt for Trudell. Stephen Quadros, unrecognizable here as the guy from Shock 'Em Dead (1991) even though it was only a few years before this, plays not just another guy with a snappy wardrobe. He looks a lot like Kevin Bacon this time around. We've heard of fakin' bacon, but this is ridiculous. There are a lot of other B-Movie names on display, such as Eb Lottimer, Rick Dean, and Jillian McWhirter, who did a lot of low-budget action movies in her day, notably Last Man Standing (1995).

Director Jonathan Winfrey (presumably no relation to Oprah) was hot off of one of our favorite titles - but not one of our favorite movies - Excessive Force II: Force On Force (1995). He does a competent job, and, like most Corman movies, the running time is on the shorter side. Meaning there isn't really time to get truly bored, but a bit more action and a bit less running around might have helped things a bit.
On the brighter side, the soundtrack is a standout, ranging from hard rock to funk, but there are no credits saying who did the songs. There are no Bloodfist soundtrack albums as of this writing, but someone should at least compile a "Best of Bloodfist" for those that enjoy the music from the series. I think collectors would appreciate that.


In the end, Bloodfist VII: Manhunt is enjoyable enough, but it isn't really exceptional in any way. There are enough decent moments to keep it afloat, but don't go in expecting fireworks.
Comeuppance Review by: Brett and Ty
Also check out write-ups from our buddies, The Video Vacuum, Cool Target and DTVC!
Posted by Ty at 22.7.21

This is not a joke. I remember trying to watch this once and thinking "Man, this is nowhere near as good as Bloodfist 4: Die Trying. That one is awesome ... Probably the best sequel.

Been a bit since I've commented, but I assure you I read every one of of these write-ups. And as usual, I need to recognize greatness when I see it.

If you fellas ended up somehow converting these reviews into YouTube videos, maybe interspersed with clips from the movies you're discussing, you'd never have to work a minute in your lives again.

As always, an absolutely stellar review. Who could imagine so many years ago when Don signed on to do Bloodfist VII that people would not only watch it, but review it for all of posterity?

THIS SITE IS PURE GOLD, GENTLEMEN.

Port: That's a funny thought, you have to be a real action film fan to think that. Haha

Joe: Thanks as always! That's very nice of you. We try to review stuff for posterity's sake. As for the Youtube stuff, we do the audio version in the form of our podcast which I think you would enjoy if you're not already a listener. :-)