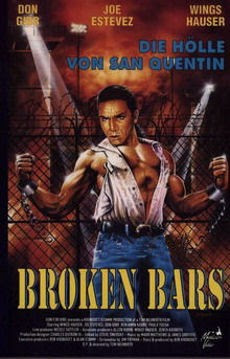 
At Trabuco Federal Prison in Los Angeles, bad stuff is goin' down. A corrupt warden named Pitt (Wings) forces the inmates to Punchfight for his own amusement. If they agree to do this, he rewards them with in-cell delivery of prostitutes, strippers, drugs, and, presumably, cigarettes. He's helped along in all of this by his C.O./henchman, Mr. Jake (Gibb). If anyone disobeys Pitt in any way - including refusing to Punchfight - he spikes their heroin with poison and tosses them away.

Wanting to get to the bottom of the goings-on in Trabuco, Jack Dillon (Estevez) of the F.A.C.T. special ops division (don't ask what it stands for, as it was never said...or if it was, we missed it) sends in his best man: Nick Slater (Kobby). The taciturn Slater then proceeds to either fight or make friends with a series of stereotypes...er...I mean, inmates, until the eventual final showdown with Pitt. Won't anyone reform our criminal justice system?

Broken Bars is nothing if not a parade of men with questionable hair punching the snot out of each other. If that's what you're after (and why wouldn't you be?) then this is the movie for you. An alarming amount of the prison population in 'Bars is ponytailed and shirtless. Or some combination thereof. There are more ponytails per capita in this movie than in an episode of My Little Pony.

All that being said, Broken Bars follows the prison-Punchfighter template pretty much to the letter with no surprises in store. Bloodfist III (1992), Death Warrant (1990) and In Hell (2003) are classic examples. Van Damme is usually involved in some way.
Wings, as he usually does, brings a lot of charisma and command to his performance, and he tries mightily to save an otherwise bog-standard outing, as our friends from the UK might say. With his military uniform and close-cropped blonde hair, he really made us see how much he looks like Guile from Street Fighter. Surely not coincidentally, that's yet another Van Damme connection. 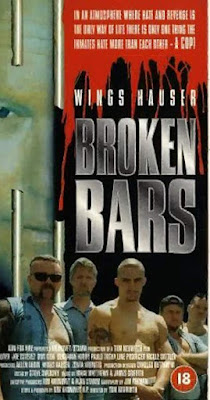 Fan favorite Donald Gibb also stands out as a cast member who is trying. But, as Death Warrant had a clear-cut evil baddie like The Sandman, and Broken Bars has no such character, it starts to flounder a bit without that focus.

The production company Gun For Hire was behind both this and Enter The Blood Ring (1995), and we noticed some similarities between the two films. Both starred Benjamin Kobby and both featured a ringleader character of some sort who sits in a chair and watches people punchfight.
In this case it's Wings Hauser, in the other film it's Robert Z'Dar. Evidently, the people at GFH thought this was an incredibly winning formula, but as it turned out, Broken Bars and Enter The Blood Ring are two of the rarest Punchfighters of the 90's. 'Bars barely eked out a VHS release here in America on the York Entertainment label. 1995 was a banner year for Gun For Hire, though.

It's all very much like an episode of Renegade - a ponytailed hero rides into our lives on his motorcycle while blues guitar wails on the soundtrack. There's also the Prerequisite Torture of the hero, among other clichés we all know and love. We do credit the filmmakers for adding some gratuitous female nudity, because without that, we'd be looking at an all-male cast for 95 minutes, and they must have figured that wouldn't go over well with what is probably an all-male viewership.

Broken Bars certainly won't win any points for originality (except maybe for the title, which we're still trying to figure out), but as a semi-lost video store artifact, it has some value. The only problem is that it struggles to hold our full interest for the entire running time. Those two factors pendulumed back and forth for us, as it surely will for you too.