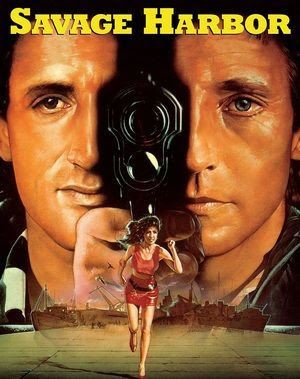 Joe Hardwell (Stallone) is a well-meaning guy but his job as a seafaring man takes him out of his hometown of San Pedro, CA for months at a stretch as he travels from port to port. Consequently, Hardwell has trouble forging lasting personal relationships. Despite his tough exterior, it appears he is a lonely man. He has his buddy Bill (Mitchum), who is also a sailor and a trusty companion. When back in town on shore leave, they hang out at the Tradewinds bar. It's there that Bill meets the dancer Roxey (Loring) and their relationship is as turbulent as the waters the two men sail on.

Still looking for love, Hardwell happens upon a woman being assaulted in a car. He foils the attack and he quickly finds a connection with Anne Teasdale (Mayo-Chandler). After a whirlwind courtship, they plan to get married. There's only one problem. The evil gangster and pimp Harry Kane (Caruso). He exploits Anne's troubled past and soon has her hooked on heroin and enslaved in the sex trafficking industry.
When Hardwell comes back from his latest stint abroad, he finds Anne missing. Now he has to traverse the seedy underworld of drugs and prostitution to find her and rescue her from Kane. So Hardwell and Bill do just that, until something happens that really puts Hardwell over the top in a rage and he vows to take down the whole Kane gang. He has to navigate some rough waters in his quest for a relationship, but will Joe Hardwell ever find safe harbor...or will it be a SAVAGE HARBOR? Find out today...

Despite what some people may say, including Frank Stallone himself (more on which later), we found Savage Harbor to be an entertaining and enjoyable outing and a lot of fun to watch. It reminded us of one of our favorites, Death Flash (1986) - though, to be fair, it's hard to beat Death Flash. But Savage Harbor comes close. It has a similar plot and a similar vibe. 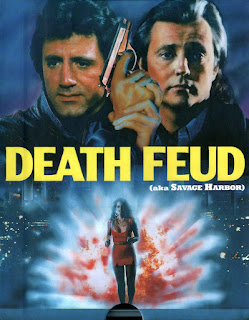 It all begins with a very funny shootout on the beach and it wraps up with a nice revenge conclusion. There are some amusing beat-em-up scenes and a couple of good car chases/stunts thrown in as well. Fan favorites Frank Stallone and Chris Mitchum keep things afloat. Mitchum is his typical laconic self and Stallone has a lot of charisma, as always.
In the film, his big dream in life is to own an avocado farm. That represents his desire to get away from all the craziness of the modern world and find some peace and solace. We can all relate to that. Also, in 1987 he was really ahead of his time. Now everyone eats guacamole and avocado toast. Joe Hardwell would be a millionaire today.
We also really enjoyed Karen Mayo-Chandler as Anne. She has a Caroline Munro-esque beauty and charm and she wears a lot of great outfits. She also appears in a noteworthy dream sequence. She was asked to do a lot over the course of the film and she acquitted herself well. Greta Blackburn shows up as a helpful prostitute. Both Mayo-Chandler and Blackburn were in Party Line (1988), also released by Vinegar Syndrome. It was nice to see Nicholas Worth (playing his usual heavy) and Lisa Loring on board, and both the director and producer (Monson and Mardi Rustam, respectively) played roles as well. It was truly a low-budget, all-hands-on-deck type of situation. It's all very entertaining so it works for us, the viewer.

It originally came out on VHS in the U.S. as Death Feud, but truly all the thanks and credit should go to the great Vinegar Syndrome for releasing Savage Harbor on Blu-Ray. The transfer is beautiful and now everyone can see it in all its HD glory. The disc includes a very honest and candid interview with Frank Stallone where he, in a very self-effacing and comic manner, derides the film and says how "bad" it is. Numerous times. You don't see that too often in DVD/Blu-Ray extras. It's a fun watch, much like the main film itself. If you pick up the Blu-Ray, be sure to check out the interview.

Featuring some catchy songs on the soundtrack, Savage Harbor (AKA Death Feud) is a delight for fans of these sorts of down n' dirty B-movies of the 80's. We give it a strong recommendation.