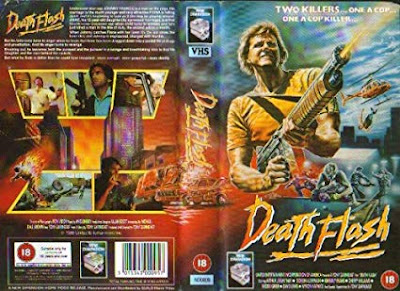 Johnny Duncan (Nay) is a classic COTE (Cop On The Edge) who goes OVER the edge when he finds out his wife Fiona (Alderman) is having an affair. Duncan is out of control, and he ends up behind bars. He ends up cleverly breaking out of prison when he finds out his sister Annie (Evans) and her friend Julie (Williams) are being kept under the iron fist of a wealthy drug lord. Duncan then proceeds to launch a one-man war against all the baddies involved in order to save his loved ones. Anyone opposed to this sort of action say Nay!

Death Flash (AKA Solitary) is a ton of enjoyable fun from start to finish. You just have to love movies like this – they really are true gems. Director/Co-Writer Tony Zarindast predated his Hardcase and Fist (1989) with this treasure, although this one doesn’t feature Beano. Well, I guess you can’t have it all. Zarindast even has a small role as the Machine Gun Joe character, Mr. Russo. One of the most pleasurable aspects of Death Flash is just how 80’s it is. This movie is 1986 through and through, and no 80’s fan can afford to miss it. 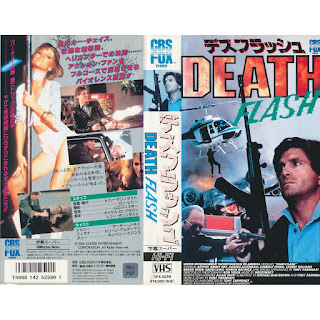 Our new hero is one Arthur Jeremy Nay, but we call him A.J. He did a lot of work in stunts and appeared in small roles in some action movies, but here he really comes out to shine. While there are a lot of crazy stunts towards the end, we do see him display his abilities as a master of trickery when he dons a foolproof disguise to infiltrate the baddies. We won’t give it away, but remember Fred from the Dunkin Donuts commercials (“Time to make the donuts!”)? He would dress up as various things in order to get his precious donuts, including a woman. Fred had a large mustache, but he just covered it up with his finger when he went undercover as the opposite sex. Let’s just say A.J. Nay does that, but in reverse.

He also will engage in barfights with tough guys in order to defend the honor of his wife’s singing voice. Her band sings a catchy tune called “Secrecy” (performed by Cheryl Jewel), but some rowdy bar patrons don’t approve. They then feel the wrath of Nay.

The music overall is yet more classic 80’s, and mostly performed by a man known, mysteriously, only as Mrozinski. The soundtrack should be released on CD and/or vinyl, and this movie should be released on Blu-Ray stat. It could be packaged with Hardcase and Fist and put out under the banner of “The Tony Zarindast Collection”. Here’s hoping (against hope) that that happens soon.

All the classic clichés that we know, love, and can’t live without are here, including the aforementioned barfight, a truly excellent WYC (White Yelling Chief) in Captain Stanhope (de Soto), lots of punch-ups, blow-ups, shootings, and motorbike-to-helicopter chases, among others. There’s a terrific shootout in a bar with some pinball machines, most places characters go (including strip clubs) have stand-up arcade machines such as Centipede and Pac-Man, the cocaine is plentiful, the hair is big, and the women’s clothes are asymmetrical. Duncan even has a Black partner in Dawson (Lewis) – because the 80’s-ness wouldn’t be complete without a reference to Crockett & Tubbs.

For the atmosphere alone, Death Flash is worth seeing. It’s a pleasant surprise from a time when energetic and enterprising filmmakers could make action movies on a rock-bottom budget and come out with a winner. Comparisons to Samurai Cop (1991) and Miami Connection (1987) wouldn’t be unwarranted. It’s just that they’ve gotten more attention of late. Now that Death Flash is on Amazon Prime (as of this writing), hopefully that will change.


Thank goodness for A.J. Nay, thank goodness for Tony Zarindast, and most of all thank goodness for the 80’s. It was the best decade ever and Death Flash is proof. The whole thing might not be polished to the degree some people might like, but, much more importantly, it’s just FUN. We guarantee you will be entertained by Death Flash, and that’s more than a lot of movies with many more resources can claim. We really recommend it.