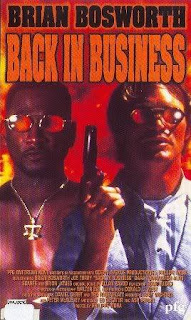 Joe Elkhart (Boz) is just a humble car mechanic in L.A. who is a regular caller to the radio talk show of psychologist Dr. Sonia Brody (Egan). He's trying to get over the feelings of anger and aggression he feels after being a good police officer who was kicked off the force after trying to expose some dirty cops. This leads him to re-connect with his old partner Tony Dunbar (Torry), and the current cop and the ex-cop try to catch the evil drug lord David Ashby (Scarfe). Pretty soon, the FBI is involved with them, and Elkhart is involved with fellow therapy maven Natalie Walker (Tomanovich). It all comes to a head with the final showdown between our heroes and the evil Emery Ryker (James). Will Elkhart and Dunbar be BACK IN BUSINESS? Or will they be out of business?


To quote the back of the VHS box, "Named NATO 'Action Star of Tomorrow' for his high-octane performance in Stone Cold, Brian 'The Boz' Bosworth is back in business as maverick ex-cop Joe Elkhart." We didn't know NATO was in the business of naming action stars anything, but apparently they are. Finally, some tax dollars well spent. In Germany, this movie was called Stone Cold II: Heart of Stone - which is an interesting factoid, but really this has less to do with the classic Stone Cold, and more to do with buddy cop action/comedies wrought by 48 Hours (1982) and Lethal Weapon (1987).
The movie is filled with the non-stop banter between Bosworth, who plays a more vulnerable type this time around - you could best call him a lovable lunkhead - and the Chris Tucker/Eddie Griffin stylings of Joe Torry. Don't confuse him with his brother Guy Torry, who makes a splash at the beginning of the film. 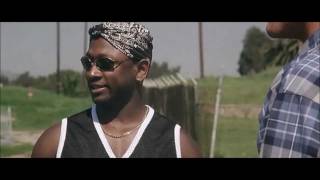 There's a lot of silly humor amongst the shootings and blow-ups, and the radio talk show angle was a bit different. The film was made during the height of popularity of shows like Dr. Laura, so why not have Brian Bosworth be a caller on her radio show? It's an interesting combination. The whole sequence at the car auction where Joe Torry dresses up like an Arab Sheik may be a comedic movie highlight, but you know there's going to be some chases or shootouts just around the corner. 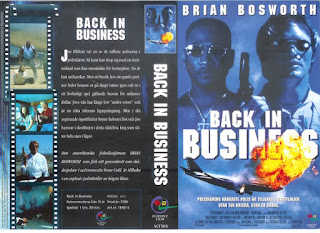 Let's face it, this isn't as good as Back in Action (1994), with Billy Blanks and Roddy Piper. You could easily mistake the two. Well, at least the titles. One of the recurring themes on the soundtrack is a drum solo that sounds like the beginning of Hot For Teacher. We were just waiting for The Boz to say, "I've got my pencil..." While the movie has blink-and-you'll-miss-them appearances from Michael Clarke Duncan and fan favorite Wynn Irwin, clearly the boo-hiss baddie is Brion James this time around, and he does it well.

Director Philippe Mora was last heard from on this site as the director of Death of a Soldier (1986), with Reb Brown. He's probably best known for directing 80's horror movies such as The Howling II: Your Sister is a Werewolf (1985) and The Beast Within (1982). He keeps things moving, and while there are a couple of slow moments towards the beginning (the basketball sequence goes on too long), things pick up considerably soon enough.


Sure, it has plenty of the "Stupid" moments we've come to love, or at least expect, but since when is that a problem? It's part of what keeps Back in Business afloat. Apparently it wasn't successful enough overall (despite its tenuous Stone Cold connection) to warrant a series of sequels with EPMD-esque titles.


Fans of The Boz (aren't we all?) and of the buddy cop genre will likely warm to Back in Business.
Comeuppance Review by: Brett and Ty

This was a pretty fun one, Torry and Bosworth make for a pretty good pairing. The same year this came out Bosworth would do a similar pairing with Glenn Plummer for his short-lived FOX action TV series "Lawless"(which only aired ONE episode before being cancelled with the remaining episodes never having been seen since in one of the biggest examples ever of a TV show getting royally screwed over). The pilot is on Youtube if you're curious.

P.S. I managed to get my hands on the uncut version of Cartel(1990) and uploaded it onto Internet Archive if that interests you.

NATO here is the National Association of Theatre Owners, though I would like to see what the military alliance would routinely pick.

SOA: Cool thanks for the extra info about Lawless and Cartel! Will check those out.

Matt: Their response would be deadly! Haha