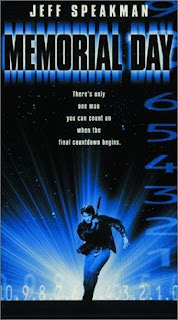 A group of deep-state government guys led by Willard (Mantee) have decided that something needs to be done about their dwindling budgets in the post-cold war era. So, naturally, he devises a supposed terrorist threat called "Red 5". When a crusading senator, a man named Lancaster (Coffin), gets too close to the truth during his efforts to root out what Red 5 truly is, a government assassin named Edward Downey (Speakman) is called in to knock off Lancaster. Just having come out of forced incarceration in a mental institution, Downey is none too happy about being a government pawn.
So, working with journalist Robin Conners (Niznik), he risks it all to expose the bureaucratic hacks, the brainwashing, and the evil satellites causing the havoc as Red 5. If any of what you just read makes any sense to you, do check out MEMORIAL DAY!

Also, we don't want to forget to mention the uncredited appearance by Joe Estevez. He appears in the beginning of the film as "Agency/Willard's Contact", and the speech he gives is great. It really sets the tone for what is to follow, as all the backroom dealing and government conspiracy stuff is Memorial Day's strong suit. It's not really an action movie per se, it's more of a political thriller done with a low DTV budget. That being said, our old buddy Speakman does do some Martial Arts here and there, but there definitely should have been a lot more of it. 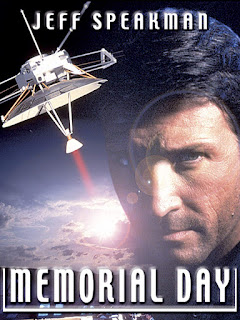 For the first half, things bounce around in a rather unfocused manner, which is part of the fun. The idea that director Worth Keeter thought that audiences would be fully engaged in this silliness is kind of amusing. A lot of the dialogue was fun to hear, because back in 1998, it was pretty ahead of its time. A lot of what they were saying still holds true today. Throw in some footage from some other movies, and you have an outing that's very redolent of the late-90's DTV scene.

The box art, complete with its Independence Day (1996) font, would lead you to believe that this is a sci-fi slog. Thankfully, it's not. The closest it gets is all the gobbledygook about satellites. Thankfully, no aliens, space stations, or the like are on show here. To see Speakman in that context, see (or, rather, do not see) Scorpio One. That film was also directed by Keeter the same year as this, 1998. Maybe he got confused. Inexplicably, there are some Star Wars-influenced music cues on the soundtrack, and the name of the ersatz terrorist group, Red Five, is a Star Wars reference. Just why they thought this was necessary, we don't know.
Interestingly, this is not the only political thriller Speakman was in around this time. As we all know, he starred with Shatner in Land of the Free, also in 1998. That's a fun movie that's well worth checking out. Not that Memorial Day is bad, as it certainly has its charm, but Keeter's best film to date is arguably L.A. Bounty (1989).

We kept wondering why they didn't call the movie Election Day, as that would have seemed to be the no-brainer title choice for this, although there is a definite reason why it's called Memorial Day. You'll just have to watch it to unlock that secret.

In the end, Memorial Day has just enough going for it to make it a worthwhile watch. It isn't explosively awesome, but it has its merits.
Comeuppance Review By: Brett and Ty
Posted by Ty at 30.5.22