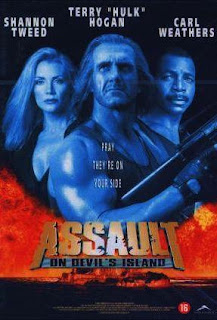 While it may be a bit confusing as to which of the two Shadow Warriors telefilms came first, we're reasonably confident that this is the first appearance of the team consisting of Mike McBride (Hulk), Roy Brown (Weathers), Hunter Wiley (Tweed), and Andy Powers (Kove). The follow-up, Shadow Warriors: Assault on Death Mountain (1999), came two years after this one.

In this initial installment of the two-movie series, our heroes are tasked with bringing down the evil drug lord Carlos Gallindo (Drago), and his goons Fraker (Goddard) and Creagan (Blanks). While they're doing that, they have to rescue the kidnapped American Gymnastics team, who is imprisoned in a cage in a room that's slowly filling with water. Will the Shadow Warriors - a team of friendly mercenaries tasked with missions like this one - save the day once again? Or is it the first time? You're gonna have to tune in if you want to find out...

Shadow Warriors: Assault on Devil's Island is very, very similar to the other movie in the series. If you've seen that one, and you happened to enjoy it, you will find more of the same here. For those unfamiliar with these TV films, they are quite lightweight despite the fact that there are fights, guard tower falls, blow-ups and shootings. Somewhere along the way there's a very silly exploding helicopter. 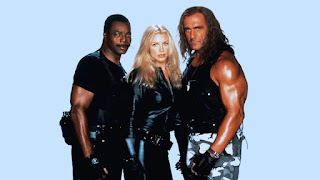 If it was just Carl Weathers and Shannon Tweed in an R-rated film going around and taking out the trash, it would have made all the difference in the world - and, sad but true, it would've been a massive improvement. Sad because the presence of Hulk Hogan as the main character kind of gets in the way. Yes, his hair, facial expressions, high-waisted pants, and line deliveries are absolutely ridiculous, and that does provide some enjoyment. But he should have been more of a background character, like Martin Kove or even Billy Blanks are here.
The fight between Blanks and Hogan is as daffy as everything else on display. Also we should mention that the film opens with Hulk doing some form of yoga on the beach and he's into tarot cards and mysticism. Just like in real life. Blanks went from Balance of Power (1996), where he punched steam, to here, where he punches meat. As we said in our review of the other Shadow Warriors film, thank goodness for Shannon Tweed. The fact that she's here helps a lot. Almost saves things, in fact.

Billy Drago plays - you guessed it - the baddie in his customary manner. His classic head-tilt and slimy manner are here once again. Trevor Goddard is a strong presence as his muscle. Billy Blanks should have had more to do overall.

Because a gymnastics team is kidnapped, it may remind you of Blast (1997). Because of certain plot points involving Billy Drago, it may remind you of Delta Force 2 (1990). Combine that with the fact that this is a telefilm meant to air after episodes of wrestling on TNT, and there you have it.

Concluding with our heroes walking towards the camera in slow motion and looking quite serious, are we to conclude that we should take all this goofiness seriously? That may be one of the great mysteries of life, along with which Shadow Warriors entry is which. Action fans seeking something dark, gritty, and adult are advised to look elsewhere, but if you've got a taste for the silly, and you've got nothing better to watch, there's always the duo of Shadow Warriors films.
Comeuppance Review by: Brett and Ty
Posted by Ty at 25.8.22