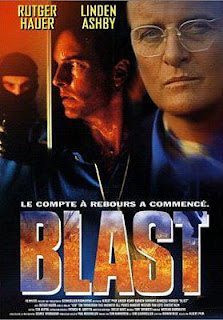 
Some terrorist baddies decide to take the swim team hostage at the Atlanta Olympics. Sure. Makes sense. The stereotypical eurotrash baddie this time around is Omodo (Divoff). Needless to say, he has an accent and a team of nefarious helpers, and he’s not afraid to use either one. Foiling their plans is humble janitor Jack Bryant (Ashby). Evidently he was an Olympic Tae Kwon Do champion at some point in the past and he took the janitor job just to be close to the Olympics in some form or fashion.

While Police Commissioner (that’s all he’s credited as) (Thomerson) is doing his best during this trying hostage situation, seemingly Jack Bryant’s only real help comes in the form of a man named Leo (Hauer), who is wheelchair-bound and has Willie Nelson-esque pigtails. Sure. Makes sense. Will Jack Bryant – who doesn’t exactly give Jack Wild a run for his money – defeat the baddies and save the swim team? Will watching this movie be a total BLAST? Or…not so much? Dare you find out? 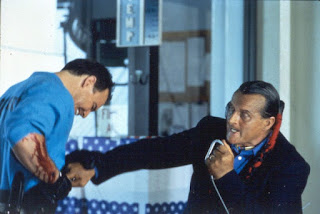 Okay, we knew going in that this was an Albert Pyun-directed Die Hard knockoff. Our prospects were looking dim, but we decided to forge ahead anyway – as they say, “expect the worst but pray for the best”. Or something like that. We’d love to say that we were pleasantly surprised, but we simply weren’t. Blast is a dull, bland, uninspired and mediocre run-through of clichés. Pyun seems to have a reverse Midas touch – he always manages to take any material he works with and make it dour and gray.


We’ll try and stay positive. The cast is good, which is one reason we decided to throw (well-deserved) caution to the wind and plunge headlong back into Pyun-land in the first place. We appreciated the presence of fan favorite Divoff, but he’s better in Ballistica. Of course we love Rutger Hauer, but it’s necessarily a sit-down role, and not much of one at that. It’s pretty much the same for Tim Thomerson. Our…hero…Linden Ashby is like Matthew McConaughey but without any personality or life. The swim team girls resemble Julia Louis-Dreyfus, Selma Blair, and Shannon Elizabeth. Upon further inspection, we found that one of them is Shannon Elizabeth. 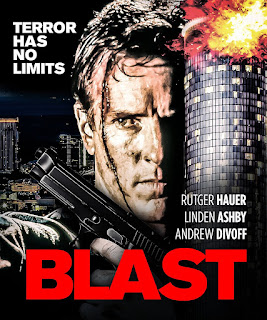 The Die-Hard-with-a-janitor scenario was done better with Michael Dudikoff (as most things are) in Virtual Assassin (1995). The problem here is that the baddies wear the same clothing as the staff because they were trying to blend in, so it’s hard to tell who is who during the fight scenes. Said fight scenes could have had much more impact if they were just shot better. Interestingly, John Wick (2014) co-director Chad Stahelski gets a thank you during the credits, so we can only assume anything that makes the fight scenes good are because of him.

Unlike other Pyun movies, things actually happen in this film, and that’s to his credit. Unfortunately, what does happen is pedestrian and colorless. He even manages to muck things up by adding those unnecessary and annoying sounds as transition noises between scenes. Why do some directors think this is necessary? Perhaps the best thing about Blast is the Filmwerks logo, which is a lot like the one from MTV News. Before the movie started, we got excited that Kurt Loder was going to throw it to Tabitha Soren, but, alas, that was not to be.

Perhaps the more apt title for this movie would have been “Bomb”.

Also check out a write-up from our buddy, The DTVC!

Blast (2004) was a much bigger blast. Whose bright idea was it to put Hauer in a wheelchair? Well, at least we have a Die Hard at the Olympics movie, but it could have been so much better.

Once again we agree, that's a better idea. Hauer should've broken free from the wheelchair and starting beating up thugs.