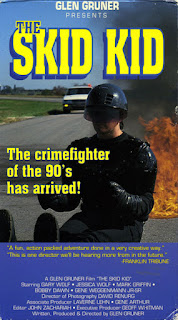 When Scooter Spielberg (Gary Wolf) discovers a pair of miraculous boots in the middle of the highway that allow him to travel at fast speeds while just sitting on the ground, he becomes the newest crimefighter in Union, Missouri. Union is in the midst of a crime wave, and THE SKID KID, as he's dubbed by the local media, aims to stop it. The problem is that Scooter is just a regular high school kid with his own problems, such as a rivalry with Mr. All-Star (Scott Wolf), and girlfriend problems with Stephanie (Jessica Wolf). Meanwhile, the FBI is after Scooter, presumably to know the secret of the boots, and not jealousy as to the fact that he's cleaning up crime in town. Will the Skid Kid live to skid again?

The Skid Kid is an extremely charming and endearing regional production from Missouri. Clearly it was a labor of love for all involved, especially director/writer/producer/editor/actor and all-around Skid Kid mastermind Glen Gruner. Just exactly how Gruner came up with this whackadoo idea is not yet known, but the fact that he put his passion to work by actually putting the time and effort into making this movie is quite impressive. His love for the idea of a kid who can sit on the ground and move with the speed of a car is the overriding feeling here, and it's pretty infectious.


You know you're in good hands when, after the initial skidding scene ends, there's a kid with a mullet doing an extended wheelie on his bike. Very extended. The music throughout the film is very booming and rousing (and clearly sourced from somewhere with big orchestras). It's all populated with non-professional actors and is shot on what appears to be 8MM film. This gives it a 70's look and feel at times, even though the official release date is 1991.


The Skid Kid has other powers as well, as he can make skateboards appear out of nowhere. He gives one to a local tot who seems happy about it. The magical boots run on soda (how Scooter figures this out is never explained, but doesn't need to be), which leads to dialogue such as, and I quote, "I need more soda for my boots." You don't hear that said too often. That's why The Skid Kid is a treasure.


Scooter's catchphrase is "Gotta Scoot!" - BEFORE he becomes The Skid Kid. It's almost like he was fulfilling his destiny when he found the boots. He truly was born to scoot. Like any good Godfrey Ho movie, it all ends with a classic Final Field Fight. The closest comparison we can provide about The Skid Kid, with its family-friendly tone and aspiring filmmakers, is Kindergarten "Ninja" (1994), but the production values on that even surpass The Skid Kid. But it's okay, because it's all in fun.

Apparently the Wolf family, the most famous of which is Scott, was involved in the production. It would be interesting to hear him talk about this in an interview. Nevertheless, even if you don't like The Skid Kid, it's only 70 minutes. If truth be told, that is the perfect running time, because at that point the audience is pretty much Skid Kid'ed out. But it's a fun ride while it lasts.


Thanks to the VHS collecting community, there is more awareness now about The Skid Kid. Because of Instagram, YouTube, and other social media, lesser-seen local gems like this can gain wider exposure.


If you don't mind some local color, and you're up for watching the type of movie you and your friends could have made - or perhaps did make - give The Skid Kid a spin.
Comeuppance Review by: Brett and Ty
Posted by Ty at 19.1.23