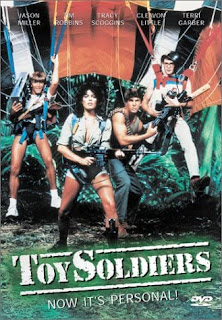 A man known only as Sarge (Miller) is a former Marine and Vietnam vet who now takes college kids on vacations to Central America on his yacht for fun and profit. On one particular excursion near Panama, some of the kids are taken hostage by "rebels" AKA the usual El Presidente types. Sarge, Amy (Garber), Boe (Robbins), Trevor (Pointexder) and some of the others manage to escape back to L.A.


But, on the urging on Amy, they decide to get into training mode so they can go back to rescue Monique (Scoggins), the injured Tom (Greenleaf), and other kids from their group that were left behind. Towards that end, they team up with Buck (Little), a pilot and former soldier that's willing to help them. Eventually they face off against the Central American fighters during their rescue mission. But are these college kids true warriors...or a bunch of TOY SOLDIERS?


Someone should really ask Tim Robbins about this movie. I think we're all curious as to his experiences as far as the making of Toy Soldiers goes. It all starts off in classic Romp fashion, with guys and girls in bathing suits on a yacht, pulling pranks on each other and laughing it up while synths play on the soundtrack. This was probably the best part of Toy Soldiers. Of course, Robbins is no stranger to Romps, as he was also in Fraternity Vacation (1985), which shares similarities with this first section of the film.


However, after this initial first blast of fun, things settle quickly down into a mediocre, by-the-numbers dullsville that we've all seen before. Examples - some of which are better than others - include Night Force (1987), Out of Control (1985), Damned River (1989), and Hired to Kill (1990), just to name a few. When the audience is begging your movie to be more like Mankillers (1987), you know there are some serious issues at hand.


It's the same old-same old El Presidente slog we're all quite familiar with at this point. Toy Soldiers (not to be confused with that other Toy Soldiers from 1991) is boring and standard, with nothing to really hang your hat on. To add insult to injury, all the guys in the movie wear the shortest shorts you've ever seen.


Most of the "action" only appears at the end, when there's some shooting and exploding huts during the final rescue mission. But what about the other 80 or so minutes? Hmmmm...

While there are some fun musical cues and stings on the soundtrack, it's just not enough to overcome the movie's many flaws. Probably the most obvious of which is that there is no character development so the audience doesn't really care what happens to either the college kids or the Jason Miller or Cleavon Little characters. It should have been the latter two busting heads and fighting the baddies as the main thrust of the plot.

Much like an episode of The Golden Girls, we get a "highlight reel" of moments we've just suffered through behind the end credits. So we all have the privilege of saying, "Wow, remember when Tim Robbins and the nerd guy smashed the watermelon?" - because, as part of their "training", in order to face off against deadly machine-gunners with nothing to lose, they hit a watermelon with a bat.

Featuring an end credits song that sounds a lot like Bertie Higgins' "Key Largo", Alan Graham's "It Couldn't Be Better" is truly a misnomer. The song should have been, "It Should've Been Better".

Released by New World Home Video on VHS in America, Toy Soldiers is a by-the-numbers dud and is inessential viewing.